My plan to take a very early lunch, in order to avoid the ‘lunch crowd’ at the bank backfired.

It seems I’m not the only one who had that plan.

I’ve said it before, and it bears repeating – I don’t mind standing in line.

I think of all the people who would give anything to be able to.

To hear the chatter around them. To see the sights … the colors.

People unable to leave their homes.

People no longer with us.

What would they give to stand in that line?

There was a beautiful Native American woman in front of me. A black braid ran the length of her back – a turquoise and silver hair clip securing the top of it. No grey – in spite of her advanced age. She was lovely. Freckles and kind, happy eyes.

And she was waiting patiently as I was.

There was some mumbling – impatience and she turned and locked eyes with me and we shared a smile. There was understanding and amusement. And peaceful resonance.

Then she took her turn – and I kept staring at her, unable to look away – until I was called for mine. 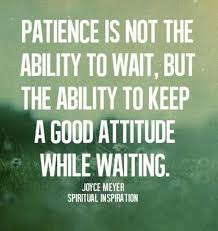 I have very good instincts.

I have always been able to trust my gut – having said that, this does not mean I’ve always made the right choices.

In my past, I definitely self sabotaged.  Let people into my life that satisfied a need to treat myself poorly or provided a lesson I needed to learn.

But, still I knew who they were and what I was getting into deep down.

I’m healthier now – I’ve worked out most of my demons – I’ve grown and blossomed.

I need to trust that – and not the opinions of others.

To be honest, this past year, I let doubt and negativity in and allowed my faith to waiver.

I was never more certain my trust has been placed in the right hands than I was yesterday.

I was renewed with patience.  With affirmation that what I’ve put my life on hold for is worth it.  Not only is it worth it – it IS my life.

I couldn’t love someone who didn’t have a passion – who didn’t think of others or want to better the world by being of service somehow.  Whether that be education, art, charity …

There is nothing less attractive than a soul wrapped up in self.

I’ve felt guilty of this when I’ve privately pouted that I could not have the person I wait for sooner.   The selfless thing to do IS to wait.

I feel with every fiber of my soul that what the object of my affection is doing something so much more important and so much bigger than ‘us’.

And I know what I’m waiting for is worth it.  I know this.

And I know I can trust my instincts.

Musings from the Laundromat: Clocks and Curbs edition

I woke up this morning, turned my sleepy head to the clock and thought ‘Wow! I slept in!’  Clock said it was after eight.  I couldn’t see how much after eight it was, my nighttime drink cup was blocking the minutes.

Decided to leap into action.  Figured I’d shower after I returned and had cleaned the house – threw a pair of jeans on, ran a brush through my hair and heated a cup of coffee to-go.

That’s when I noticed the clock on the kitchen wall.

For some bizarre reason, my bedroom clock time traveled.

It decided to Spring Forward – not even caring that we in Arizona do not observe the time change and completely ignoring the fact that if we did it was the wrong weekend to do so.

Bottom line, I was now ahead of myself.

I gathered my laundry – hunted the usual spots that my son’s laundry lurks, captured and bagged those items and headed out the door.

The laundromat opens at 8:00 a.m., but I’ve noticed that the sweet laundry lady usually opens a bit early.  I know this as I have arrived at eight on the dot and there have already been early birds sitting with their newspapers while their clothes are enjoying a wash cycle.

Deduction.  I am capable of it.  Gold star for me.

This morning, the pavement in front of the laundromat was littered with people. People and an assortment of baskets.

I carried my items over into the fray and plopped down on the curb to wait and sip my coffee.

One lady in particular kept pushing up against the glass – repeating the same Captain Obvious sentences over and over – and over.

“Something must be wrong!”

She probably announced those two things at least a dozen times to anyone who would listen.

Except when it comes to listening to people who aren’t. 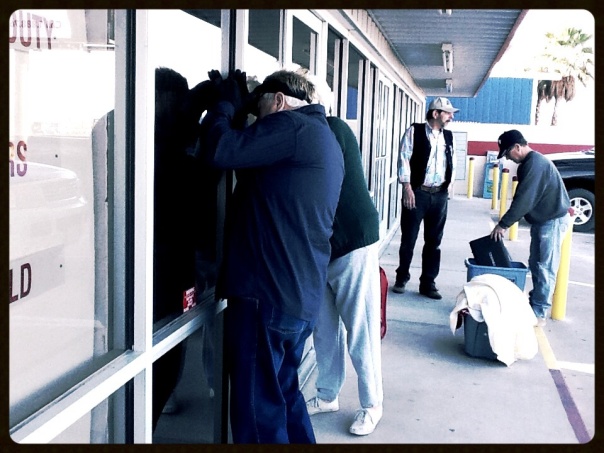 A new car pulled in – which had everyone who had previously been pressed against the door, turning like curious dogs in a yard.

When newcomer exited their vehicle, ‘something must be wrong’ lady filled them in.

“The lights aren’t even on!  The lights at the counter are even off!”

Which she followed up with this gem as another newcomer arrived approximately 3 minutes later:

“The lights are on, but nobody’s home!”

Okay, which is it lady?  Lights are either on or off.

‘Something must be wrong’ lady is the sort of person I can’t stand having behind me or in front of me in any line.  Whether it’s the grocery store or the pharmacy or the bank.

Impatient – and loud about it.  Sighing and clucking and complaining.  I’ll use my ‘You know, there are people who would give anything to be standing in this line right now’ from time to time, but mostly I roll my eyes and enter a trance like state to block out the squawking.

The whole time, I’m sitting and sipping and thinking “Probably she slept in.”

I was willing to wait until 8:30, then I would put plan B into action – do laundry after work on Monday.

They drove off, one by one.  Leaving me – and two others to greet the laundry lady a mere 2 minutes after they gave up.

The door opened and I turned and smiled.

“So sorry” she said, “I didn’t hear my alarm this morning.”

I got up from the curb – went inside and was able to stuff my favorite washing machines and claim my favorite seat.

Patience has such rewards.

Posted in Humor, Musings from the laundromat, Uncategorized

I am very, very, very patient.  I drive my son bonkers sometimes with my patience.

I have no problem waiting in line at the grocery store or the bank.  I’ve always had a comeback for those who are getting antsy “you know, there are some people who would give anything to be in this line right now”.

There is one thing though, that drives me bananas!

Pedestrians crossing in front of me without so much as a little finger wave of gratitude or nowadays, not even looking up to acknowledge I’m there!

I’m waiting as they slowly meander (usually diagonally) to the other side.

(I say that instead of OMG, I’m not referring to my actual dog, who knows how to hustle across a road by the way).

Put some giddy-up in that step!!

Used to be it was the younger walker.  You could always count on an elder to make eye contact, give a little nod or wave and walk with some speed in thanks.

Not sure what bothers me so much about it – because I’m honestly not in a hurry.  I think maybe it’s because it seems to have gone from having the ‘right of way’ to having a sense of unappreciated entitlement.

Which brings me to manners in general.

When did we stop saying ‘Please’ and ‘Thank you’?  Well, I didn’t stop.  And it seems to amaze store clerks, waiters,  and anyone else who provides a service to me.

And don’t give me that ‘they get paid to do it’ crap either.

I get so upset when on the rare occasion I’m behind someone in a drive through and hear “Yeah … gimme a number 5”.

I always do my job.  But I’ll be honest, if someone is polite to me – pleasant on the phone or smiles in person, I’m much more likely to go the extra mile for them.

But it shouldn’t just be to get something back.  For me, it’s just first nature to say ‘please’ and ‘thank you’.  Besides not getting spit in my food or cans put on top of my eggs in my shopping bag – it feels good and it feels right!

And when I cross the damn street, even if I’m in a cross walk, I make eye contact with the waiting driver and raise my hand in thanks and do the little skip-into-fast -walk thingy.