Warning: Strap yourself in for this one, or you will incur whiplash.  I’m shall be swerving from topic to topic and tangent to tangent.  Keep your hands and arms inside the post at all times.  Any appendages not safely and securely contained within the blog are in jeopardy.  You have been warned.  Now you can’t sue me.

Ah the irony of my Soul Stretch post and the bundle of insane that I became yesterday.  I should have remembered to stretch.  ALWAYS stretch.

This morning a customer said to me “I don’t know how you do your job, I couldn’t do it.  And you’ve been SO sweet!”  Evidently she didn’t notice my eye twitching involuntarily nor was she aware of the length I go to in order to keep my ‘thought Tourette’s’ safely tucked into my mind and not allowing them to come out of my mouth.

But DAMN it’s stressful some days.

I battle with underwriters, absurd lending guidelines, government rules all whilst fielding a daily barrage of panic from realtors, escrow officers and customers.

All with a smile.  All while breathing in through my nose, out through my mouth and staring like a Jedi at my ‘shut-up-Buddha’ willing him to transfer to me his serenity and ability to not speak.

I lost it a little earlier.  Just a smidge.  Okay – let’s be honest.  If someone had a straight jacket handy, probably they would have cut their eye from it, to me, to it and back to me – deciding whether or not it was possible to slip it on me safely.

I was googling funny pictures about stress.  Found this particular one and what bubbled up as an innocent fit of giggles, turned to eye watering, uncontrollable bursts of laughter.  The poor loan officer, only feet away from me must have wondered what the hell was going on – as I convulsed in my chair barely able to breathe. 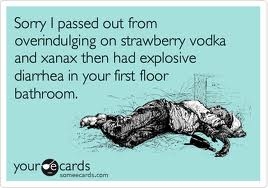 No, no … none of that actually happened.  Well, not to me.  Clearly it happened to someone or:

a) it wouldn’t be an ecard and

b) it wouldn’t be relatable to any recipients.

Oh gawd, this DID happen to someone didn’t it??

Let’s go back in time shall we … all the way back to last Wednesday.

This was my little Wednesday arm.

I decided, since I am rolling in money – to spend a large chunk of it and some of my copious free time at the ER. (Ouch, sarcasm sometimes hurts when you type it)

I have a heart condition called ‘Inappropriate Sinus Tachycardia’.  And I swear, this is the last time I want to talk about or mention this.  Basically, my heart misfires electrically sometimes (okay, quite frequently) and get’s all confused and thinks I’ve just run a marathon when I am actually doing something really physically exhausting like sleeping, resting or sitting in an office chair.  That crazy mixed up heart of mine.  It’s silly ;).

What then ensues is me – getting to experience all the fun symptoms of a heart attack, without the heart attack part.  I do relaxation breathing – if I can walk steadily, I’ll find the nearest sink and run my hands under cool water (that seems to help sometimes) or, I’ll go sit with someone, usually my friend Betty if at work, and just listen to her talk about anything but how I’m feeling.  (Because if I focus on the fact that I’m not feeling well, it gets worse) And, eventually my spell passes.

And I know my ‘normal’ now – and I’m used to it – so when something different starts to join the tachycardia party, I get scared.

Little arm day, was brought on by three really painful, sharp thuds in the center of my chest, after trying my breathing solutions and cool water trick.

And I’ve been experiencing rapid heart beat when I exert myself lately.  You know, like climbing the three steps to my porch or getting up too quickly. Serious exertion 😉

It’s a good thing I’m thin, because I can not exercise.  You will not see me jogging or doing jumping jacks … ever.

Oooo!  First tangent.  Speaking of sex … So, I’m wearing a dress that my friend gave me, and shoes that she gave me.  I went into her office and said “Hey, if you’ve got a hair clip and a pair of underwear I can wear I’ll be head to toe Betty”  To which she replied, “Hair clip I could do … the underwear would end up around your ankles”  (She was referring to my thin frame) To which I responded “Ah … the good old days.”

It’s been a while since my underwear was anywhere but on me or in the laundry basket.  But … anyway.

Let’s now turn to yesterday – the day I lost my last marble.

Fourth of July.  My original plans included a man I adore, my son, BBQ at my parents and a four-day weekend.  Not bad eh?

What actually happened:  Argument with my son, spending the day alone crying like a basket case and not even having a hot dog.

To be fair – and I am fair … my part in this argument was that I was already stressed out – the man I adore has been unavoidably delayed, I’ve been worried, I had my little arm day, and I just had a shorter fuse than usual.

Instead of being the mature parent that I am, (that time the sarcasm hurt less … hmmm … clearly if you use it often it gets easier) I resorted to bringing up every single thing I was pissed off about instead of staying on current topics.  My words were pretty venomous and I was ashamed of that.  I did own my part in that – I did apologize later for being so ugly.  It was wrong.

I won’t go into detail about the argument – but suffice it to say, someone stormed out (and it wasn’t me) and the argument continued online.  What have we come to?  That we argue on IM?   Although, it’s nice to point out in black and white proof of a sentence when someone says “I never said that!”  HA!

One such sentence (that wasn’t denied) was “I’ll move out”.  Oh gawd.

I should have taken into consideration that without a vehicle, job or place to go – this was an empty threat – but my mood at that moment didn’t allow for logic.  I was mortally wounded by that notion.

He wanted his independence.

Independence??  He goes where he wants, when he wants – has no obligations around the house and the house to himself all day while I work?  It’s not as if he lives in North Korea?!

Anyway, none of this was funny yesterday at all.  Awful day.  He did come home.  We did talk.  And I gave him the biggest hug I could muster.

But after a good two weeks of stressing out – that was the last straw for me.  I lost my last marble.  Gone.  Poof!

I decided today to do the only sensible thing I could.

I’m guarding these ones – and I will keep smiling – breathing and laughing.