Unfriended – and a giant fish

For all my growth and new maturity (I say with a modicum of sarcasm) I thought I had let go of a certain resentment.  It became very apparent that I have not relieved myself of it – after a couple of small kicks to the teeth last night.

So I’m breaking one rule of confidentiality and I’m going to talk about someone.  Oh yeah, I’m gonna.  Gird your loins.

I’m even putting a photo up … so other women can take heed.  I did blur out the other person in the pic (see, I do still have an edit button.)

Nic and I were chatting about his ‘donor’  I won’t give him the noble title of ‘Father’ or ‘dad’ he earned neither.

There is a catchy song on the radio by an entertainer named Mackelmore.  When I looked this song up, I was surprised to find he resembled said ‘donor’ when I knew him in the clubs.  Only, donor had darker blonde hair and a leather jacket.  But, similar looking. See below.  That is Mackelmore. 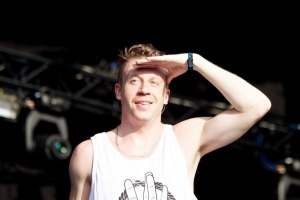 Damien Lewis also reminds me of a young version of donor

I wanted to compare to be sure – as it’s been over 18 years since I saw ‘donor’ young.

I went onto Facebook where I am friends with ‘donors’ mother.  I use the term ‘friend’ loosely.  I think we only chatted twice.  Once she actually asked me to send pictures of Nic?  Um …. It’s Facebook – I have a WHOLE BUNCH of photo albums chock-a-block full of pictures of Nic.  Click on them woman!

There were 3 pictures of donor in her album.  So I typed her name and … nothing.  She had unfriended me!!!

Now, the last message I sent to her was just before Nic turned 18.  basically saying that it would be the last time I reached out and made an effort.  I’ve had this notion from the get go that just because donor didn’t want to be in his son’s life, didn’t mean I should punish Nic’s paternal grandparents.  I took him to meet his paternal grandmother as a newborn.  She didn’t want to hold him.  I took him to say good-bye when I was about to move to Nevada when Nic was in 2nd grade.   They took a few Polaroids.  The second visit before we left town was met with donor on the couch.  (Gee, thanks for giving me the heads up that my son is about to meet his donor with no preparation.)

That was the first and only time that donor and son ever met.

I recall he took Nic out onto the playground as I waited nervously – he introduced him to everyone as his son and then showed him his DJ equipment at his apartment (same complex).

I left town and never saw him again.  Never pressed for child support.  Never contacted him.  He made it very clear he did not want to be a father – so be it.

Now, his mom not only unfriended me … but blocked me.  And that ticked me off.

It’s one thing to be a deadbeat dad, but what grandparent doesn’t want to know their grandchild?!?!

If a girl came to me holding a baby and saying it was my sons child – I’d have quite a chat with Nic.  Did you have sex with this girl?  If so – then there IS a chance this is your child.  If you do not believe that to be the case, initiate tests to determine the truth.  If it is your child, step up and provide for that child.  Emotionally and financially.

Was there ever a conversation about Nic between them I wonder?

So I’m sore about being ‘dissed’ by grandma.   Nic says he’ll find him and we start searching the net.  He announces “I FOUND HIM!”  My boy is a funny guy … on his ipad, in the google search box were just the words “Dead Beat Dad”.  Ha ha.

I entered his name … and did find him.

It wasn’t until I saw his smiling, carefree face that I realized how angry I still am.

Not only smiling and carefree, but evidently quite the avid fisherman now (AND reviewing expensive rods and reels on Amazon.  That’s just super that you have extra money to spend on your hobby there champ!)

Here is the photo:  He’s on the left

I wanted to punch him in the face.  I wanted that fish to suddenly pull a Monty Python “I’m not dead yet!” and bite his pointing finger off.

The frustration that I feel seeing him enjoying his life when he walked away from his responsibilities is beyond my ability to describe.

I have been angry a lot of today.

I have to stop – drop and roll.  No, that’s for something else …

I have to stop.  Breathe.  Look at fact.

What I do know is I have more forgiving to do.  Because I’m not there yet on this one.

On a happy note – Nic isn’t phased by any of this.  I don’t know where he gets his resilience, but I’m glad he has it.  I also hope he has bail money should I ever bump into donor in the future.

Topic was brought up by my son this afternoon.  “You should sue my bio”.

Don’t think I haven’t thought about it – but the conclusion I come to every time is that we’re better off emotionally without him in our lives and I’d rather have my serenity and a peaceful heart than his money.

I don’t want to be vengeful.

Bothers me a little that my son wants compensation when he’s never actually gone without.  There’s even been a few Christmas lists that he really had to think about because he already had everything that could have been on that list.

I don’t feel like we’ve missed out on anything?

Would it have been nice to be able to go on vacations?  Of course.  Would it be nice to have that little extra for when unexpected emergencies arose?  Of course.  But we made it.

We managed to make the best of what we had and did not go without.

No, there’s not been the latest, greatest, shiniest – and things did get really financially hard for a while.  But we made it.

Why would I want someone in my son’s life that doesn’t want to be there?

I want peace, not court ordered,  begrudgingly doled out money.

Of course, times like right now in my life, it sure would come in handy.  But at what cost??

In the bigger picture, I’d like Nic to learn from everything we’ve gone through together.  To step up and be a father when that time comes.  To appreciate what he has versus what he doesn’t.  To let resentments go.

I don’t resent his ‘bio’.  If not for him there would be no Nic.

I do have a beef with his self-centered absence from conception to now.  As much as I try to explain to Nic that he shouldn’t take that personally – it’s bound to have an effect on him.  But how can it truly be personal?   He didn’t choose not to be Nic’s father, he chose not to BE a father.  Period.  He didn’t know Nic. If he had, and had walked out, I could definitely see the logic in taking that personally.

I need some insight here.

I need opinions and thoughts because my son believes we ‘deserve’ for ‘bio’ to make a financial amends – and I do not.  I think we are happy – why mess with that?

I am open to the possibility that this could also be my pride and I could be wrong.

But seriously, why go through agencies, paternity tests, lawyers – for a monthly recompense?  The stress of just initiating the whole process – is it worth it?

Honestly, I wouldn’t even know how to begin such a process.  And I definitely don’t have the money for an attorney.

He should have been contributing to raising his son for 17 years, and did not.  This is true. But I just think it’s too late now.

Would love some thoughts on this.

Posted in Motherhood, My Favorites