← Musings about the laundromat: Barking, Finding and Noticing edition.
Musings from the Laundromat: Relaxing Flu Edition. →

It’s been 3 weeks since I’ve sat at the laundromat.  Not for lack of trying.  Came 2 weeks ago – but no one showed.  But today, I’m here and in a show of solidarity, the WIFI is actually working!

I’ve been ‘peopling’ in an effort to throw myself out of the house and beat this anxiety/agoraphobia stuff.

Last Saturday night I was to attend my bosses house for a small party with dinner and drinks.

Let’s just say, it ended with me bleeding and spending the week applying neosporin to the scrape above my cut and swollen upper lip.  May or may not have fractured my nose too – Super tender and I woke up last night to it bleeding again.

But, as they say, if you’re going to have too many beverages, it should be at your bosses house.

Said NO ONE EVER!

I called my boss in the morning and was assured I wasn’t inappropriate and that everyone had a great time.  The ‘incident’ occurred when she and I were outside waiting for my taxi.

She left me unattended for a brief moment to flag said taxi down, in which time, I managed to get out of my chair, lose my balance, break a fall with my face and stand up again.  See, this is why they hired me!  Excellent time management!

Last night was a long anticipated concert that my mum managed to get tickets for.

Now, I don’t know all of their songs, I’m not going to lie.  But the ones I know, I enjoy.  And KISS is such an iconic band that you really have to say “YES! I would love to see them” when asked.

She had 2 tickets, and with my bird out of the nest I didn’t really have anyone to take.

She decided to give the other ticket to a friend of hers who really wanted to go.  Then didn’t.

I met up with her at a casino she was staying at and received my ticket.

She mentioned that the other guy wasn’t going – but that she would walk with me to the venue.  (There’s no parking at this particular event center – it’s either take a shuttle or hoof it.)

We began walking and I started to get a tad nervous about how large the event was.

The seat assignment on my ticket soothed me however, front and center, 6 rows back!

We approached my destination and she stood with me in the line for security.

“What are you going to do with the other ticket?”

“Mum, you can go, I’ll be ok.  You need to get back and get the ticket to the person so they don’t miss the start.”

She kept walking with me and suddenly we were both at security and she was being scanned.

Did NOT see that one coming.

“You owe me big time.  I’m sacrificing myself for this.”

As it turned out – she had a blast.  As did I.  Seats were amazing, show was fantastic.

“Which ones are the originals?”

“Which ones are my age?”

Lots of questions – then much standing and dancing and singing along. 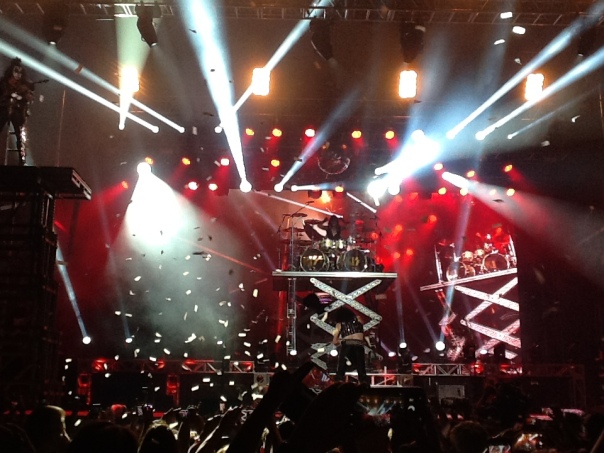 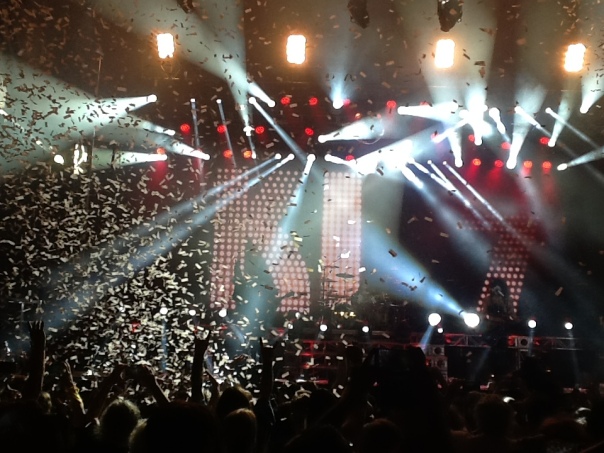 A great deal of that confetti landed in my top – in my bra – in my purse and in my eye. LOL!

I’ve heard a lot of negative comments about Paul’s voice, but I’ll tell you that live he sounded amazing.  Of course he’s not going to sound like he did decades ago – but they all performed incredibly!

We walked back to her casino (and my car) hand in hand.

A small firecracker!  Who went to see a band she had no interest in seeing to spend time with me.

This getting out and about thing may leave me with bruises sometimes – but I’m conquering my fears and making memories.

I hope for many more.

← Musings about the laundromat: Barking, Finding and Noticing edition.
Musings from the Laundromat: Relaxing Flu Edition. →