Musings about the laundromat: Barking, Finding and Noticing edition.

Alarm was set for seven this morning, it needn’t have been.

I was rudely awakened by the persistent bark of the neighbor’s corgi.  Butters joined in and I dragged myself to my bedroom window.

Said corgi was staring at the side of my house and would not stop alerting.

I threw some ‘outside’ clothes on and headed out to see what the fracas was about.

A newly dug hole now exists leading to under my home.

This after a trap sat unsuccessfully for a week in the very same spot.  (Sans hole.)

I’m assuming my skunk is back.

I’m over caring.  As long as a) Skunks stay nocturnal and b) Nothing else moves in under there to startle it.

Had a long day of napping yesterday and (without too much information, wishing I had an epidural)  so I was wide awake.

Headed out to the laundromat after a shower.

Me: Yeah, I didn’t even have half a basket.

I tossed my items in the machine and took my usual spot.

This was only after I noticed a rock on the table. 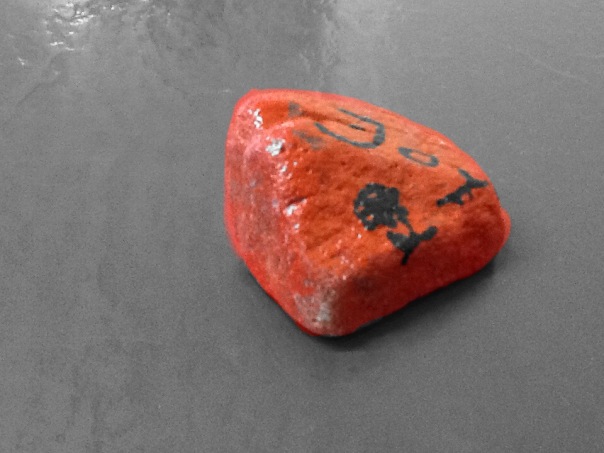 I turned it over to discover the purpose.

So!  There are now painted rocks hidden in our town and if you find one, you can post a photo of your find to the Facebook page – then re-hide it or keep it or leave it.

What a wonderful way to begin the morning though – with the word, “Joy.”

I was a little upset that once again the WIFI the laundromat boasts was not functioning again.

That was ok though, I came prepared with a book.

It’s taking me entirely too long to read, not because it isn’t good, it’s amazing!   It’s taking me too long because I’ve slowed down on my reading time (not good.)

There was a particular sentence I savored.

“The scratching of the bushes no longer sounded cozy. Spindly fingers asked to be let in, dark figures flitted around the house and looked for a gap, a small opening to squeeze through” – Stefan Kiesbye (Knives, Forks, Scissors, Flames.)

I kept reading until it was time to check the wash.

That’s when I noticed my laundromat neighbor.

Not to be unkind, but only honest, the first thing I noticed was his ripeness.

I set the book aside after seating myself again and observed. 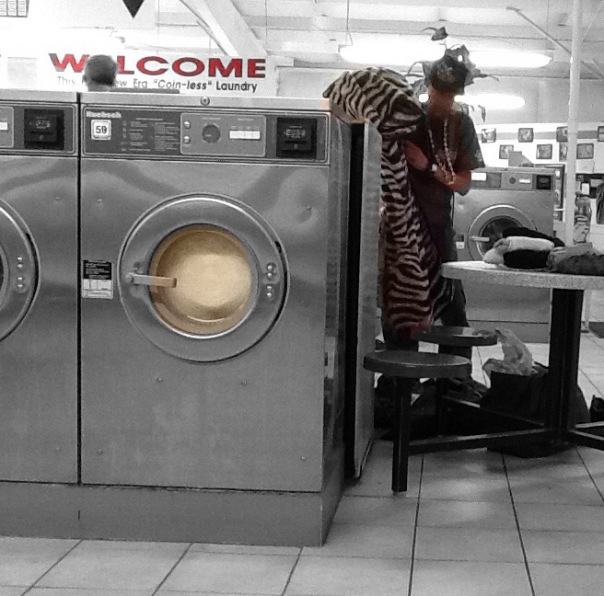 I took all of him in.

His table, his stance, his belongings.

I make the assumption he was homeless.

On his table, 17 cents – a small tube of toothpaste and a toothbrush, an insulated drinking vessel and some clean folded socks.

Yes, I felt some guilt sneaking this photo – but he’d disappeared into the bathroom to groom and I couldn’t let the moment pass.

My first thought now?  This man had everything he carried with him, and I was going to watch his stuff.

My second thought?  He was laundering his items and if anyone had a problem with that I was going into momma lion mode.

This photo breaks my heart a little – and was not intended.

A serendipitous snap of the camera.

And while all we shared was a brief smile, he shared more with me than he’ll ever know.

I chose to leave that rock at the table by the way – so that perhaps someone else could find ‘Joy’.