Workin’ to the oldies

Working away today at my desk with a top 40 station playing in the background.  The DJ announces it was time for a song for all the hot moms out there – we’re going ALL the way back, they said.

I was hoping for some Madness or Bon Jovi or Depeche Mode or something.

We went alllll the way back to 2003 with a Fountains of Wayne song.

In the past that sound bite has been followed by something from the 80’s maybe early 90’s.  I got to be part of the target audience!  I got to be ‘hot mom’.  Not today.

Calm down grandma – I’m not saying this is a bad thing, I am merely pointing out that just yesterday I was ‘mom’ age and now …

When did this happen??

I took this question to a friend who works next door.  (Who, by the way, has nearly 15 years on me and is one hot babe and just this morning sent me a hilarious squirrel picture).

We pondered – have we really changed?  I mean, yeah – we’re wiser and worldlier (is that a word?  Apparently not, in edit mode it has a red line under it, but it’s staying) have a better grasp of what’s important in life and know more ‘stuff’ – but the essence of who we truly are, the things we like etc. have remained pretty constant.

So now of course, my tangent brain takes this ponderance (also not a word) to a new level with this charming thought.

Those old men I excused years ago with an  ‘Aw … he’s old, he’s harmless’  when they grabbed or spoke inappropriately, were doing those things with their 20-year-old essence in their older bodies.  Ewwwwww!

Shame on you!  Shame!

Back to the music thing.  You know, I took my son to his first concert, it was the Beach Boys.  Then to see Bret Michaels, total trip since I was his age when my friend Donna and I saw Poison (with Ratt funnily enough – the irony caught up to me later).  Then just this last summer to see the Summerland Tour.

So we’ll end this with the photo of the Gin Blossoms singer Robin Wilson and this old grandma aged woman. 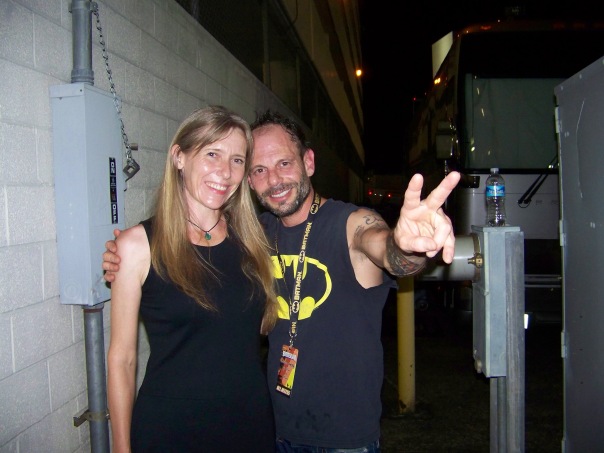 Rock On! To all you moms out there – and rockin’ grandmas too.