Scandalous … eye-catching.  But yeah, this is really about my dirty laundry.  Literally.

The only thing scandalous that happened was someone took the laundry cart I’d selected and I had to pick another one. :-O

Here’s what I wrote for you. 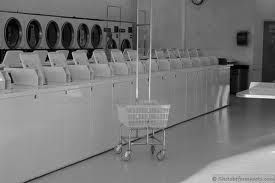 Busier than usual at the laundromat today.  “You’ve lost that loving feeling” is playing on the little boombox (are they still called that?).

All clothes sound so soft tumbling around in an industrial dryer!  I swear, the scratchiest article of clothing would sound like a fluffy, high count cotton towel in there.

I like watching people fold.  I mean, I don’t stare at them or anything, but I notice.

My favorite ‘folder’ was a wisp of a man.  I dubbed him ‘Handkerchief Man’.

He must have had at least two dozen of them at his folding table.  All white.

He halved, smoothed, quartered, smoothed.  Then placed the little square to one side once he was satisfied.

Okay, I did stare at him.  I got lost in his concentration.  He was old and thin, I wanted to wrap him in cotton wool he looked so fragile.  He kept folding, I was smiling.  Inventing his back story in my hypnotic state – just dreamy.

That is, until he walked past me muttering one foul word after another.  I was shocked – a giggle bubbled up into my throat.  It had to have been some sort of tourettes or illness saying those words, not my delicate old gentleman!

I saw him a couple of months later in line at the bank.  He was muttering again, appearing a lot less precious without his linens.

Today I’m sat in a chair in a corner.  My usual spot and my back up spot taken. Great view of the room though.

How must I look scribbling onto my little yellow pad?  Am I now someones ‘Writing Girl’?  I’ll look different at the bank. LOL!

There are 4 machines by the front windows.  A ‘grabby’ game with cheap stuffed prizes, a beverage vending machine and two antiquated video games.  I know one has ‘Frogger’ on it. (Before the novelty of the laundromat wore off, Nic used to come with me.  We ventured over that direction with some quarters).

Now I come alone.  Usually I’ll toss the dirty into a couple of machines then leave to run other errands.

It takes half an hour for the wash to finish – then I grab a cart (usually a yellow one, my favorite color) and push over to the dryers.  Nine times out of ten, a pair of underwear (always mine of course) mischievously throws itself to the floor during transfer.  I do the glance around, bend, scoop and grab manuever hoping no one saw.  Dryers take about twenty minutes.

I don’t mind so much coming here.  It’s nice to get all the loads done at once.  Sometimes though, I wish I had my ‘days off’ to be at home.

I smell of bleach from my part-time Sunday morning job – I’m grateful though.

When I get home with the clean laundry, I’ll put mine away.  Give Nic his basket (where his clothes will stay until he dips in for something he needs).

I’ll take a shower, put comfy ‘at home’ clothes on and take the afternoon to refresh before starting dinner.

That’s after I share this with you of course.

You can always count on me to share my dirty laundry.