Did NOT sleep well last night.

I watched a little picture of the plane my son was on traverse across the States and noted the altitude, speed and duration of his flight.

When I did sleep, my dreams were riddled with nightmares.  Robberies, guns … probably due to the fact that there were several noises during the night that woke me and Butters up.

I have to admit, when she barked in the night, I startled.  I usually don’t startle.

I am the one that checks out the ‘bumps in the night’.  I’ll just walk right outside bravely and see what the hell is going on.

I guess subconsciously, knowing no one is home to report my murder got to me.

Let’s face it – the dog is useless.  For all her barking at everything that passes the house (cars, cats, rabbits, lizards, bicyclists, joggers, ants …) she has no bite.

Do I really expect THIS to be my guard dog? 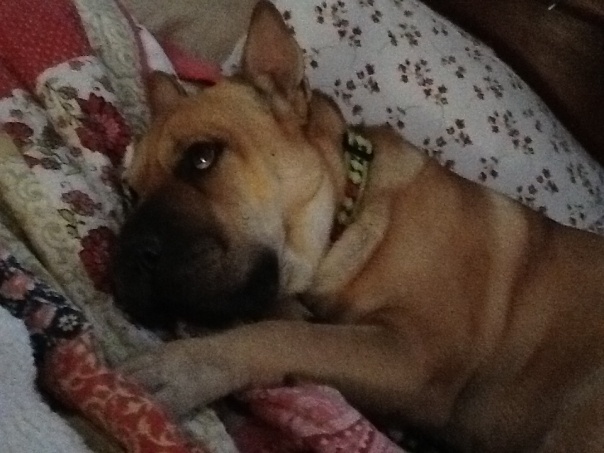 I also kept swiping at my ipad during my waking moments as I now have two men that I adore (and was hoping to hear from), on a continent and time zone that is not mine.

This morning I faked ‘awake’ as best as I could and caught up on the work I missed yesterday.

Then spoke with my friend in the UK who was going to see my son and mom.  l told him, “I want proof of life!”  I begged for a picture – and I got one.

Here’s Nic in England proudly wearing an England Football shirt given to him by my friend Rory. (He’s the one in the photo that doesn’t look like he was just on a 10 hour plane ride.)

I delved back into work.

For the first time ever.

During a thrilling power point presentation on the Home Equity Conversion Mortgage process.  I nodded off.

Upright, in my chair.

I startled awake and finished the presentation.

My boss:  “You struggling over there?”

I decided the only thing to do was to stumble over to the gas station across the street and get some coffee.

And a hot dog.

Because I’m still comfort eating.  Besides, I planned to immediately become intimate with the couch when I got home, and knew I wouldn’t have dinner.

There was a little post-it note on my calendar in my bosses handwriting that he ninja-like managed to sneak there without me noticing.

I was a little punchy after my nap, so I just eye balled him as I bit into my hot dog.

And the couch is waiting.

So the word for day one is: TIRED!

I haven’t reached ‘lonely’ status yet – so the dog is safe from conversation and pestering.

But I’m sure when I do, it will go like this: