The Day the Musings Died – and therapy gone wrong


Past two weeks at the laundromat, WIFI hasn’t worked for me.

I was unable to ‘muse’ and that bothered me.  I missed you guys and had so much to say!

They ‘fixed’ their WIFI by making a password free guest WIFI – and my iPad just would NOT pick it up.  So, actually now, laundry day sucks.

Took my Chevy to the laundry, but no WIFI.

I went to ‘therapy” on advice from my doc that knows me since 13 years ago.

I have anxiety/panic disorder and … Add to that now, agoraphobia.

The therapist told me I have no self-esteem, and after divulging every creepy sexual moment in my life and my deepest darkest secrets, he went on to say,  “You’re beautiful, you need to see yourself that way.” (As if THAT was easy to do.) He went on to say … “you have great boobs”

Are you freaking kidding me?????

THAT was my therapist.

I called him last week and told him I felt very uncomfortable with that.

I went on to say, “If I had come to you because I’d been constantly bullied, and you told me to sit down and shut up, that would have been the equivalent”.   He apologized profusely.  I told him I forgave him, but could not see him again.

I have my safe zones – driving to work and coming home.  But, when my son was out of town, I couldn’t go to the grocery store. 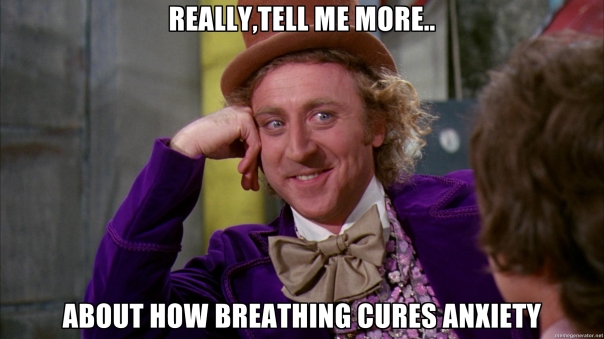 I also have a plane trip this month.

My biggest fears …. Heights and flying.

But it’s worth it.

I am very excited to see the person on the other side of that plane ride.

I have also looked up tools to survive the flight mentally.

I’m doing this.  Because it is important.  I may be shaking, may be scared but I’m going.

Imagine this though – seeing someone again who you have come to very much care for, although, sweaty, shaky, and having been up since 3 a.m.

Got to get to the airport 3 hours in advance and THEN, THEN, the flight.

I DID however Google getting over this.  And he had 3 steps.

These are what I remember.

1) You’ve been through this before and survived.

3) Shake out your arms and legs – literally.  It’s supposed to relieve something.

Guess I did remember all three.

I don’t see myself ‘shaking off’ on the plane though. Lol.  Maybe in the bathroom.

This is a very, very, very important trip and I’m GOING to do it!

(By the way, Mr. Therapist – that was padding.  But yes, I have an amazing body which should NEVER have been brought up.)