My son has been out-of-town the past week and so other than one stray sock I found of his, and Butter’s bath towel, laundry consisted of only  my items – which wasn’t much.

I came when I realized I would need underwear.

Speaking of underwear, I got my morning off to a roaring start when I realized I put the pair I’m sporting today on inside-out.  *sigh*  I wondered if it was still ok to turn them – is it like food? Is there a 5 second rule with wayward underwear?

Since I’d just got out of the shower and am hygienic anyway, I did the switch.

The upside to only having my items in the washing machine, is that I didn’t have to check pockets for paper, thumb drives or money.

I also almost didn’t ‘muse’ today – because as they say ‘if you don’t have anything nice to say, don’t say anything at all.

My car has had some issues and trust me  when I say, nothing strikes fear into my anxiety ridden heart more than ‘car issues’.

The long and short of it is it broke, was fixed – broke again.  I borrowed my son’s car which also managed to break on me.  I am car cursed.  No doubt. I shall go back to my broomstick soon if I have one more issue.

I won’t get into details – but suffice it to say, I’ve been subsiding on oatmeal, spinach and peanut and jelly sandwiches.  Money doesn’t buy happiness, but it could sure as hell make having unexpected issues a little less painful on the pocket-book.

The second fix I could not afford and had to do what I’m REALLY not good at – accept help.  Thanks mom.

Hate knowing I owe somebody something – but transportation is necessary.

Wishing this tow guy could just follow me around everywhere at this point.

Early in the week I went to fetch the office mail – it’s a small little walk to some cluster boxes.  I take the opportunity to check on my pigeons (who I’m glad to announce, are rebuilding their nest. HA!)

Meandering back – I noticed a bug on a curb, nestled up against a Starburst candy wrapper.  (my favorite flavor too – the pale pink – whatever the heck flavor that is)

I rushed in to grab my ipad and scurried back out to take a picture. 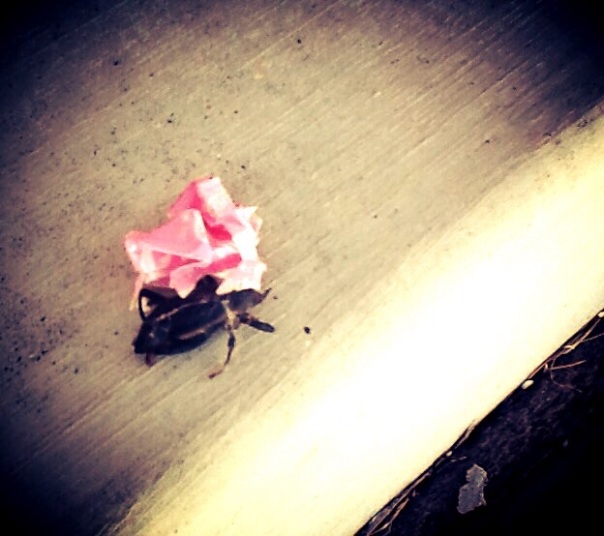 It wasn’t until closer inspection that I noticed things weren’t as they seemed.  Instead of a bug being fond of a candy wrapper and snuggling up with it – it was a piece of litter and a dead bug.

Hey – to anyone that says I am a pessimist – remember this bug story! (Mom) I had such a great back story for the bug too!  It was so freaking adorable in all its pink wrapper snuggling.

We did have a lovely bug story happen later that week at work though.

Last week we found it.

As an ‘Office Warming’ gift, we were given a plant.  I’ve been caring for it and it’s thriving.  (shocking considering my black thumb).

Anyway, one of the owners pulled the plant out of its basket and told me to come look.

The basket was sealed in plastic – and UNDER that, were at least a dozen little crickets!

They must have been born between the wicker and the layer of plastic.

We did – and as the owner let them outside I was overjoyed.

It was their first time out!   The owner joked as we watched them head in different directions “I found a leaf!”  voicing the one he was watching.

I named my cricket Mr. Nobbleheimer.  I haven’t seen him since.

I’ll keep my eyes peeled for him though.  I wonder what amazing outdoor things he’s discovered.

Probably by now he’s stumbled upon the candy wrapper bug – I hope he was momentarily charmed by it. 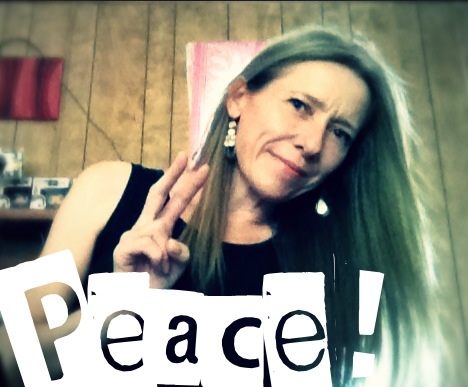 Posted on October 26, 2014, in Humor, Musings from the laundromat, Uncategorized and tagged bugs, cars, humor, underwear. Bookmark the permalink. 2 Comments.