← The advent calendar debacle
Wishing you a ‘Happy’. That’s it. Carry on. →

SO I was thinking. (Uh-Oh). I’ll begin with why I’m up.  My alarm went off, I blatantly ignored it with a thump to the snooze button, then actually acknowledged the 2nd set of beeps.

I have a book someone loaned me called ‘The Big Book of If’s’.  Thought it would be fun to post one a day on my Facebook page and see what people had to say.

This morning was ‘If you could have God perform one miracle today, what would it be?’

Yesterdays was ‘If you could change one thing about your mother’s life, what would it be?’

Now – I recall every birthday as a girl, blowing out the candles, squeezing my eyes tight and (oh so originally) wishing for a pony. Actually, I wished for a horse.

Never got one – did go on to become quite a good rider in both English and Western.  But I digress.

What if *poof* there was suddenly a horse in the garden?

When we’re little, we don’t think about the fact that the horse might actually need things.  Like, oh say, food.  Room to roam, medical care, new shoes, accessories, baths, being picked up after, etc. etc.

Had a similar thought when the Power Ball lottery here was up to half a billion dollars.  No, not that I would buy a pony, but about our initial gut response to what we would want, or want to do without considering the side effects.

If you’re not a greedy, self-centered bastard, which describes no one I know thank goodness – one repeated answer to ‘what would you do if you won the lottery’ is usually ‘I would give a lot of it away, help people’.

Very noble.  Very kind.  Very.  However, (and this is how my mind works) what about the butterfly effect?!

What if you help (with all good intentions) someone out of their tough situation and they were supposed to be going through it?

I can vouch for the fact that when things were really the darkest, I came out of it stronger, more self-aware, more spiritual and a hell of a lot more grateful.

I’d have to carefully assess someone’s entire situation before giving them the ‘gift’ of money.  Money doesn’t make everything okay.

Bailing someone out is a lot different from helping someone up.  I’m not saying I wouldn’t be giving money away left and right, because I totally would – I’d just have to take time to know if it was the right thing to do in each situation.

Thought long and hard about the mother question.  In some selfish way, I considered a lot of changes I could have wished for her, but then I probably wouldn’t have been born.  We can’t have that!  Good grief.

Remember the monkeys paw people!! (What is it with the critters?  Butterfly effect, Monkeys paw) 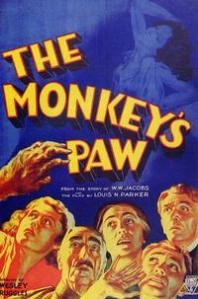 So my answer ended up being ‘that she had her dad longer’.  He passed too soon.  And she has regrets that she didn’t get to say good-bye and they weren’t speaking at the time.   But, then again, who’s to say that didn’t teach her to be sure to tell everyone from that point forward that she loves them while they’re here?

If I hadn’t lived my ‘Debauchery’ bits, well, first, this blog would be called something else.  Secondly, there would be no Nic.

Reminds me of that song by FUN – the last part:

“My heart is breaking for my sister and the con that she call “love”
When I look into my nephew’s eyes…
Man, you wouldn’t believe the most amazing things that can come from…
Some terrible {lies|nights}…ahhh…”

So we have to be careful what we wish for.  And as for today’s ‘if’.  Could wish the miracle would be ‘no war’.  ‘No sickness’.  But – if there werent’ sickness or disease, how soon until the Earth just spiraled right out of orbit with the intense weight of the mega-population?  We procreate faster than we die these days you know. (I have absolutely no facts to support that, and I’m not going to look it up either).

I shall answer today’s ‘if’ this way.

‘If you could have God perform one miracle today, what would it be?’

I would ask that he fill everyone with compassion. (That or Serenity, I can NEVER just pick one thing!)

And then I would hope that one of the compassionate people would come by and give me a pony! 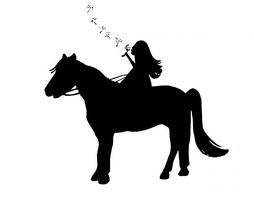 ← The advent calendar debacle
Wishing you a ‘Happy’. That’s it. Carry on. →