We took some more photos together.  This is what I do.  If the dog were to sneeze adorably I’d be looking around for my camera.  I drive Nic crazy, I know I do – but he was a good sport about my many picture requests and video requests – until we reached the airport and by that time he was giving me the celebrity glare.

From the morning session – before he viewed me as paparazzi

Then I became the annoying photog at the airport 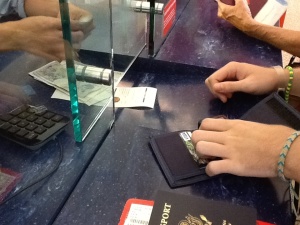 Exchanging some dollars for pounds

Could have sworn that thing was over the 50 lb limit when we packed it. lol. Well under! 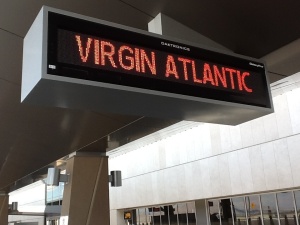 Told you, I photograph everything

The last one he’d allow of us together

The airport ‘people-delivery’ is a lot different than I remember. There is no drawn out ‘good-bye’ time as non-ticket holders are not allowed past the security check points anymore.  No hugging as they board. No watching the plane take off from the boarding area.

So it’s say “good-bye” and watch your loved one approach the x-ray machine and strip search/body cavity probe area. Okay, I exaggerate, but there WAS a full body x-ray machine thingy!

Yes, at this point, and after the last photo together – I was crying.  Not as much as I thought I would.

It’s hard to be sad when you know something wonderful is awaiting the person you love.  I’m too excited for him to be sad.

Then I get home and my boy posted some photos of his own.  One of food, lol and then this one:

I think he’s excited.  And considering his plane took off almost an hour ago – I’m sure he’s already acquainted himself with all the buttons, gadgets, bathroom locations and has already had his tray in the upright and down position. LOL.

I said to Nic on the way:

“Isn’t it funny?  Months ago we were on this same road, but going the other direction – talking about how you wanted to go to England and how amazing it would be if you could go.  And here we are on our way … you with a passport and a ticket.  You see, anything is possible.”

**Update!** I forgot to mention the most important part!  I snuck a little something in his case … He can’t possibly go to England without a naked mole rat.  Debauchery Soup is represented!  😉 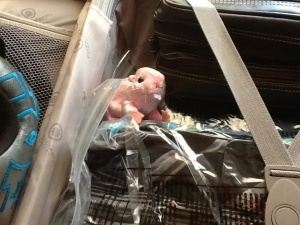 This morning I watched him walk to the car – balancing his necessary items.

Evidently, the last ‘wave from the porch as he walked up the road to the bus stop’ came and went without me knowing it.

Dang it!  I missed the opportunity to stand there, misty eyed, reflecting on past waves.

I demand a do-over.  I did NOT get the photo op I have waited 12 years for.

Anyway, it feels like only yesterday he was graduating from 8th grade!

And now … the big moment approaches.

I’ve been checking the online grade updates – emailing his teachers – talking to his counselor.  “Is there anyway, let’s just say, if Nic totally FLUNKED your final, that he would not pass your class?”

His gown is hanging in the ‘laundry room’ waiting for me to iron it.  That is going to be a kick in the pants.  I can iron – I do not like to iron.  Add to that, the material looks like it will spontaneously combust the moment  it spots an iron in its peripheral vision.  I’ll be careful.  (Or I’ll just call my mom.)

Do you think Nic would have a problem with me following him around tomorrow at school with my camera?

“Don’t mind me … carry on as you normally would.” 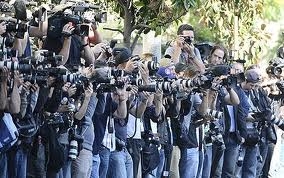 Yeah, I thought so too.