Musing from the Laundromat: TGIN!

Here was last nights sky – full of promise and beauty – and I think  my retina is forever damaged for having looked straight at it (through glass no less) to take the picture, but it was worth it. 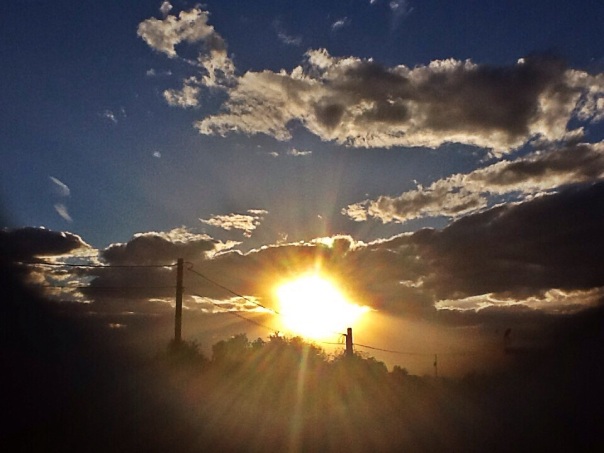 October had enough ‘suck’ in it to dampen even the most optimistic of souls.

I felt bombarded by ‘suck’.

At one of my lowest points, I was even called ‘worse than the Nazis’ by a holocaust survivor.  You can’t top that. No you can’t.  I officially win the ‘most insulted’ contest in the world.

I didn’t deserve that.  But I considered the bitter, ignorant source and let it go.

Let’s do a recap.

Lost love I’d been waiting patiently and devotedly 16 months for.  Nice 3 night, 2 day visit with the man I thought I was going to be old with on a porch one day.

Got the award-winning insult from a misinformed, interfering party.

Sons car died on me.

Had no groceries for almost two weeks due to car fix.

Ah – but good things come from bad.  I have a clean slate for November. 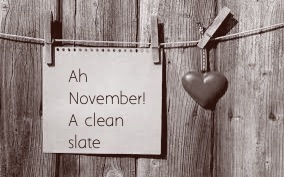 The love thing – it was better I found out early on (early – lol – after 16 months) that the Prince was a Frog.

The insult – I’ve got no bright side to that, other than confirming how completely toxic the insulter actually is.

Car – it could have left me stranded in a really bad spot – but didn’t.  Both times I was able to get the car carefully home and arrange a way to get to work.

No groceries?  I survived.  All those things in the pantry I bypassed for other things?  They got the attention they deserved.  Although, it will be a while before I want to eat oatmeal or peanut butter and jelly sandwiches again.

So I’ll shut up about October.

I call her ‘crossing lady’.  She sat and crossed her feet – uncrossed, lifted her legs into the air and crossed them the opposite way.  It was mesmerizing.

Over and over – restless feet on this lovely little lady – I wonder if she used to be a dancer.

In other news – my YouTube channel has been fun to do – but only readers of my blog are really going to find any of the entries interesting.  Or maybe not. LOL!

Much like this site of mine – I’ll eventually find my voice there too.

Why am I doing it?  Because I’m determined to get out of my anxiety shell.  Put myself out there and push the nerves down, down … to the very tips of my toes..

Speaking of getting out of my anxiety shell – I actually left the house this weekend.  I did!  I’m a hermit. I am.  I’d rather be home.  But when I DO go out, I’m the girl who strides over to a stranger with my hand out saying “Hi! I’m Amanda.”

I went to a ‘grown up’ event Halloween (good thing they didn’t want to see my ‘grown up’ membership card, because I don’t have one.)

Enjoyed sitting with friends – meeting new people and while I only stayed a couple of hours, I  was glad I did it.

So here’s to November!  May it be filled with GOOD and hope and joy.

I think if I focus on those things, its bound to be.

Check out my channel and subscribe if you’re so inclined. https://www.youtube.com/results?search_query=debauchery+soup

And here’s one from Show and Tell Tuesday.  Yeah – it’s lame.  But it is taking guts I really need to work on developing to make – so I was proud I got through it without stumbling and blushing and being incapable of speech.

Now I shall be eating a cupcake and relaxing this beautiful Sunday – Until next time – PEACE!