Reading (too much into it)

Read an amazing book.  Gone Girl by Gillian Flynn.  Could not put it down! I loved the flow of it, the intelligence of it.  I felt smarter reading it.  If I met her I’d tell her “You make me want to be a better writer.”  (And she’d probably say, “Start with not plagiarizing movies when you compliment someone”.)

The author had a way of describing things that made me think ‘Yeah! That’s exactly how that feels!’  I don’t have the ability to describe things that way.

I’ve mentioned before – I get fixated.  For instance, when I stumbled on the movie Melancholia, I fell in love with it before I’d even seen it.  I loved the movie’s internet page, loved the score.

(Here, check it out, http://www.melancholiathemovie.com/ )

I read interviews about Lars Von Trier and became obsessed with Ophelia, read more about her and then Hamlet.  Once I am interested in something, I research the hell out of it.  I finally did see the movie and I liked it, but my research needed me to love it.  I ruin things sometimes that way. 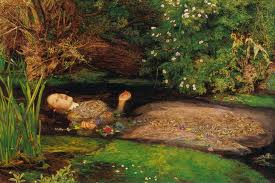 I can never just watch a movie either.  I have to watch all the special features afterwards.  If they had a section devoted to the cast and crew at the craft services table, just snacking, I’d watch that too.  I like ‘behind the scenes’.

So anyway, I’m in love with this book and a quarter of the way through it  I Google.  I don’t know why – except for … that’s what I do.  I didn’t want to know how it turned out, just curious I guess to see if other people loved it too.

I see one link and it says: ‘this delectable summer read’.  Huh?  What the heck is a ‘Summer read’?  My mind paints a picture of a fickle woman with a beach bag – not a big reader – but who wants something to break up the tedium of laying on a beach. 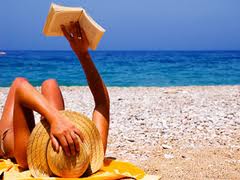 That comment made my book feel less smart.  Less important.

I Google ‘Summer read’ and it doesn’t mean that, I feel better.

I don’t want books to be put in categories like that.  I’m as eclectic with my reading genres as I am with my musical tastes.

Poe used to be my favorite – (the story Berenice in particular).  I revisited ol’ Edgar on my nook and honestly wondered why.  It was hard for me to understand if I’m being honest.  I mean, literally hard to understand.  The words were too big for me and the sentences too fussy.  It was as if he needed to write the same sentence five different ways to make a point.  How was he my favorite for so long?  Have I dumbed down?  I haven’t got the most brilliant mind, but I’m pretty smart and have a decent vocabulary.  He was over my head and didn’t hold my interest.  Maybe I’m going through a phase.

I remember in High School we had to read The Fall of the House of Usher and write something on what we thought it was about.  I hate that.  Why does everything have to have some deep, hidden meaning?

I’ve read reviews that break down a single sentence to the point of absurdity.  They’d have read that and maybe said:

“The cat represents aloofness and independence.  The protagonist however, in keeping a part of their childhood, has extended a safe place for the creature to attach itself too.  A metaphor for …”  (well, something very profound would be finishing that sentence if I was someone capable of describing things).  You get the point.

Why does everything have to be a metaphor for something?  Do we subconsciously do that?  I took creative writing in college.  We’d make enough copies of our work for everyone in class.  No names on the stories/poems whatever we’d written.  Someone would read out loud, then the Professor would go around the room and have everyone comment on the anonymous piece.  I would internally roll my eyes when they discussed my work.  I was thinking, ‘Really?  I didn’t mean that at all!”

I remember thinking along those lines when we did that High School assignment years ago, ‘What if he just really meant what he wrote?’  But I put on paper I thought it was about vampires.  (Take that Stephanie Meyer).

I’m on a second book by Gillian Flynn now.  I love the way she writes!  I won’t analyze it, just enjoy it.  But probably I’ll end up Googling it and reading other people pick her work apart.