Musings from the Laundromat: The Parenting Paradigm edition

I’ve figured it out.

The parenting paradigm.  This progression of unconditional love and support to ‘If he leaves a dirty dish in the sink one more time, I shall end him’.

I’ll preface all of this with, if my son needed me to die today in order to live – I would not ask a question except “Where do I have to go for this to happen?”

If he needed a body part and I had to saw if off myself – okay … probably that would be hard to do – but I’d let people hold me down and do it without any anesthesia.

My son is my most favorite person – my raison d’être.

Which is great!  But as I strained to lug two laundry bags inside today, and realized that 3/4 of it was his – and that he is not even here … well.

Know how we panic then experience such emotion when an animal is killed in a movie, but not so much a human?

I’ve figured it all out.

Once someone is capable of taking care of themselves but won’t – then it’s on them.

A small child – innocent animal – they can’t do it.  They depend on us.  Count on us.  Love us with pure abandon.

Which, is why I broke down and cleaned out Nic’s hamster last night.  Poor thing.

I remember how he begged to have her for his birthday – we stood in the pet store, his 19-year-old hands sweaty with birthday money and he pledged that THIS animal would be different.  After all, he was a MAN now.

When I returned home from work Friday, he had left for the weekend – and little remnants of his visit were everywhere.  Curiously, none of them cedar chips – which invariably end up on the kitchen floor during a cage cleaning.

Our current situation is this – he works Friday, Saturday, Sunday and Monday in a neighboring State.  Then he comes home Monday night and goes to our local college Tuesday, Wednesday and Thursday. I think.  There may be one more day in there.  Anyway, he stays with my mom while he’s working.  The excuse was ‘to save gas’ although, I think that was the beginning of another necessary paradigm shift – the spreading wings part.

It’s working out for me.  I get the weekends alone and still get to see him during the week in-between video games/calls to his girlfriend and Skypes.  So basically when he’s hungry and rooting around in the kitchen, or bored because he’s had his fill of online entertainment.  It’s working out for my mom for sure – she get’s grandma time.  And it’s working out for Nic.  So it’s win-win-win really.

So Friday night after telling him I was confused and was he coming home that night?  Due to the fact that his TV was on, hamster wasn’t done, trash was overflowing and dishes were on the counter.  (And I wasn’t being sarcastic) this chat happened.

it  started with me telling him I would clean out the hamster this weekend.   Yeah  I know,  pushover.  But  remember, we are pulled to caring for the defenseless.

Back to the Parenting Paradigm.

So the more the young is capable of doing, and the older the young get – the more it feels like you’ve got a non-paying roommate that does nothing to contribute to the house and yet enjoys all the benefits of living there.

Nature knows what it’s doing.  Because we were all like that to some degree and I’m certain its on purpose.  So that when the time comes for the young to leave the nest – us parents willing to saw body parts off won’t be so devastated.

I enjoy my quiet weekends.  But  I’m not ready for silent weeknights just yet.

I cleaned out the hamster last night by the way …  after I gave Butters a bath and cleaned the house – because none of those things were capable of doing themselves.

And the laundry hasn’t learned to fold itself yet – so I’m headed to the dryers and hoping you all had a wonderful weekend. 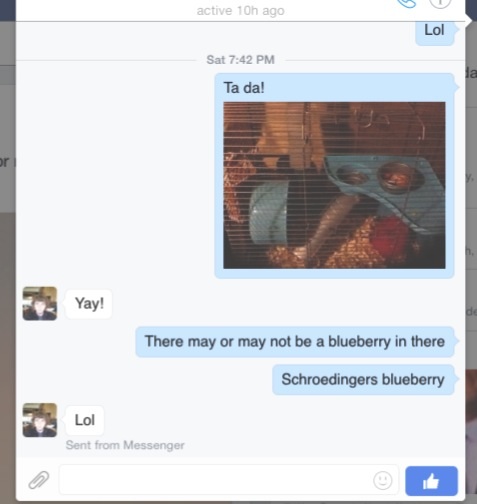