Weapons and my personal Mass Deconstruction … How I learned to ‘learn’.

I vividly remember the first time I shot a gun.  It was in England, lakeside, and I got to say “pull!”.  To my utter delight, I actually hit a clay pigeon.  FIRST. TIME. OUT!

I was so proud.  Not only was I unharmed by the recoil, but, I actually hit a target in the air!

Well, not hooked, but, I enjoyed the experience.

I’ve always had respect for guns.

Always believed that I should need to know how to take one apart, keep it clean, keep it safe from others should I ever possess one.

I didn’t own one so, I didn’t have the opportunity to practice that.

After my first opportunity to learn how to handle a firearm, it was pretty much my last, other than a BB or pellet gun.

When school shootings and mass public shootings started to become prevalent, I was angry.

“If you can’t hunt without an assault rifle, you have no business hunting!”

“The right to bear arms didn’t factor in the progress of weapons!”

“No one has business having assault weapons if they’re not in the military or law enforcement!”

“Of course they’re mentally ill!  No one ‘mentally healthy’ would do such a thing!”

“Why are there no laws to stop people who shouldn’t have guns??”

What is still true to me

People with violent pasts and/or mental illness should not have access to a machine that can mow down a mass of people.

(Do Not Compare Knife Attacks To Guns!  Apples and oranges.  Yes, if someone has an intention of hurting/killing people, they WILL find a way.  However, someone with a knife can be taken down with minimal casualties and a much larger survival rate than someone who has just fired upon a crowd with a gun.  Although, yeah, they have access to vehicles, which, can’t be contained and have also taken mass amount of people out in a single swipe.  Look, I’m still working this out in my head.)

Keep your firearms away from children!  Lock them up!  (Not the children.)

And yeah, if you need ‘rapid fire’ to take down something to eat, probably you shouldn’t be putting them through torture trying to do so with a single shot.  (Hypocritical animal lover here … I eat meat, yet, there is no way I could shoot an animal.  I OWN that hypocrisy.)

It was always a plan to learn how to operate a firearm responsibly.  What you see above is me, in a pathetic stance and loose-handed using the .38 special .

After that, we moved onto other weapons.  I was eager.

My husband actually got frustrated with me – and rightfully so.

He was trying to teach me about a particular piece I had ZERO experience with and it was a LOT of information.  Too much for me.

After all, I was there to have fun and shoot!!

He was right, and I didn’t get to ‘play’ with the gun (well, after a discussion, I did get to later).

I deserved that scolding!

Yet, there were several guns, and I had already learned a few things about them (as much as I could) – there is SO much to learn!  All so different.

Is the safety on?

Are you sure it’s clear?

Why are you sure it’s clear?

I should mention that his friend had been low key training me for a while with a revolver.

I would eject the clip (magazine)  and check the chamber.  Reload, do again.  Repeat.

My husband told me several times that day, “You have to know this!  If he kills me, you have to kill him!”

Not so funny to my husband, but I got a few other laughs.

After I earned the trust back

I felt a lot better with this weapon.

If my back was against the wall in my outer perimeter, I would feel more secure holding and firing this than the .38 special.  I had ZERO talent at aim with the .38.  I need to practice.

Racking was hard at first, but, worth it.

This is why I need to learn how to clean/oil etc.  Make that maneuver seamless.

My favorite however … and I was as shocked as you will be!

The weapon I had been the most against.

I had more control, better aim and it felt more comfortable in my hand.

We own over 2 acres.  Should people be in the outer-perimeter that I mentioned earlier, with bad intentions,  I would be useless with a .38.  And, I for sure wouldn’t deter them. (Although, honestly, after that first shot it rang my bell!!! BIG time.  Yes, I’m still talking about the .38, which, is why you see me wearing the ear protection afterwards.)

Here, in all it’s glory, is the honor to RESPECT and fire the AR 15.

I have so much to learn

I would love to be in a position to master all of these weapons.

I have such respect, always have.

I love that everyone with me was encouraging, patient, and responsible.

You should know that we hike a lot.  At one point in time, we had to leave immediately because bullets were whizzing past out heads.  Literally.  It was terrifying.

The spot we were practicing shooting was no where near hikers or homes.  We were between TWO huge buffers of dirt.  No person was at risk.  (Well, if you count me pointing the gun down there was one.)

I also would like to make a personal point.

While I respect and will always maintain the right to bear arms … tangent again … here ARE my bare arms after that day lol! 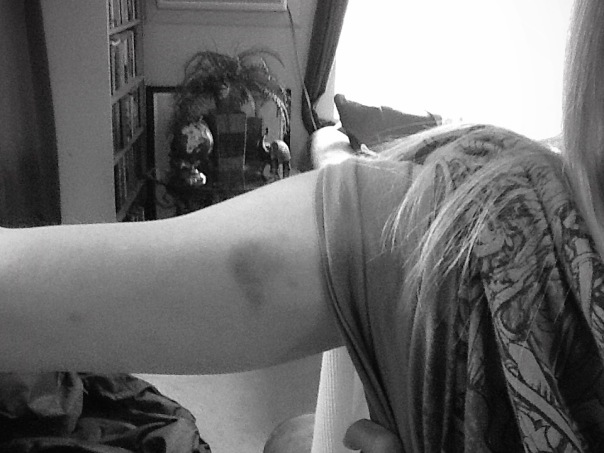 Bottom line, the only person I hurt in anyway was myself (and maybe my honey’s feelings with my joke).  And that’s a learning curve.

I want to be a responsible gun user.

I have learned that AR originated from Armalite Rifle.

I have learned that I was willing to stop, accept help, and only proceed when the environment was safe.

And, as for that AR – I’m not mad at it.  I’m mad that awful people have ruined it’s reputation.

P.S. If there was one thing I COULD change?  (Other than being called a ‘snowflake’) The whole, ‘Red Dot’ means ‘go’ is SO confusing!  We’re hardwired with the traffic light scenario.  I was thrown off a lot with that.  Safety on, is green.   Safety OFF?  Red.

Posted in desert, My Favorites, Uncategorized