← From Boy to Man – and About Alice.
Musings from the Laundromat: Storms, Rainbows and Rabbits edition →

Musings from the Laundromat: Tracks and Crumples and Butters edition.

Tracks!  Tracks in my yard.  The two doves that spend a lot of time in my neck of the desert seem to have nested nearby because I see them daily now.

Here’s one to refresh your memory:

There’s a few other creatures sticking close to my home – one of which I have lovingly named ‘Crumple Bunny’ which has morphed to ‘Crumples’ already. 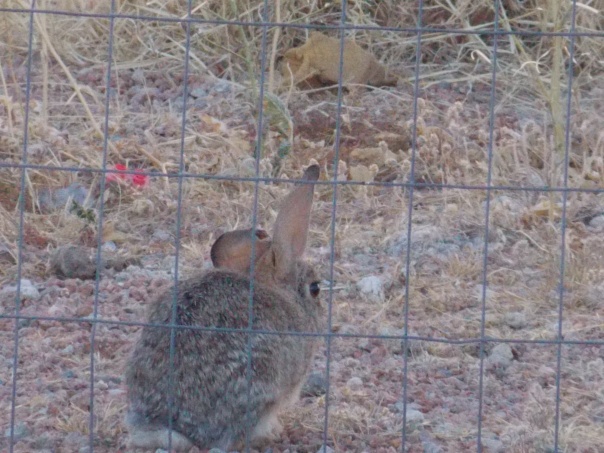 It’s little left ear is in constant flop – or – crumpled mode.  I’m not sure if it was born this way, or has been injured.  I’ve started leaving baby carrots around the area for Crumples and his able eared friend. 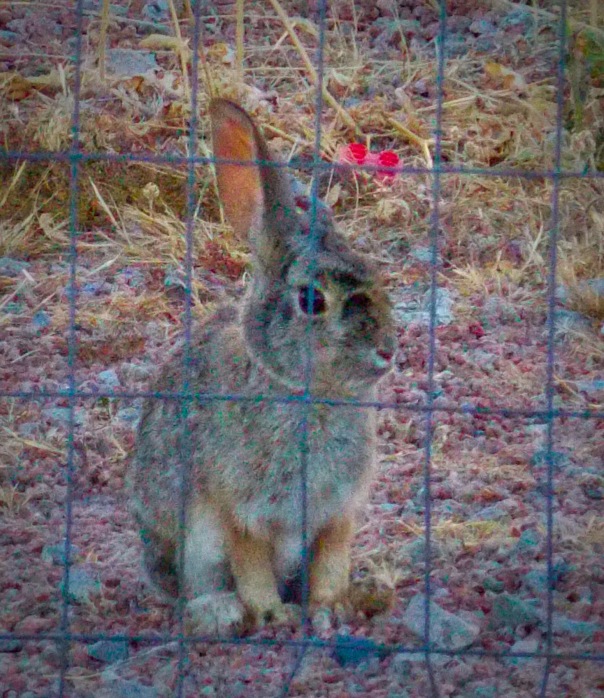 A closer shot.  It isn’t caged by the way – I took this from my porch, the rabbit was in my neighbor’s yard behind the fence.

Or – my EX neighbor’s I should say!

They also left, 3 tires, an old car, a broken shed full of gawd only knows what – a mattress, toys – and various other items. *sigh*

I didn’t expect less of them.

Back to animals – and speaking of little left things …

Butters has been stepping gingerly on her left hind foot.

I investigated as much as I could considering:

A) She doesn’t like to be prodded or examined – doubly so when there’s something to actually examine.

I can’t find anything in her paw or pads – but she had been nibbling furiously on the foot attached to said leg for some time.  I thought she needed a bath – but that didn’t fix the problem.

Then she seemed fine.

I should also mention I switched her food to a more expensive “joint care” one after her last limpy period.

(This happened last year and the vet had suggested it could be arthritis since the anti-inflammatory’s she was prescribed with seemed to give her back her usual gait.)

I then noticed she wasn’t – um – ‘Answering natures call’ on a regular basis.  Also noticed her food bowl was left for meals at a time untouched. 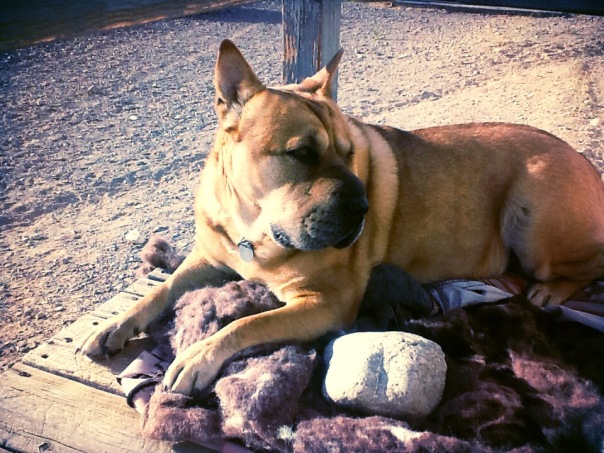 I (again, with all my veterinary training) just assumed since her foot/leg was bothering her, perhaps she just didn’t feel like eating.

Yesterday I thought I’d buy her old food and give that a shot.

I had barely put a scoop in her bowl and she dove in head first!

Kibble was flying – the bowl was clinking and … I felt like the worst dog mom on the planet.

She freaking HATED the ‘better’ food!

Poor thing has been hungry!  No wonder she hadn’t used the yard, she had nothing to give it!

I swear she gave me dirty looks all day yesterday after that.  At one point she lay on the couch opposite mine with my son – I could feel her looking at me, but when I returned eye contact, she turned her head.

She was probably thinking, “Really?  REALLY mom?  It took you a bag of food to realize I only ate it when I was flipping starving and wondered why I wasn’t going potty??!”

She is now giving what little attention I deserve as she works on forgiving me.

As for her leg – I guess it’s back to the vet with us.

THAT will be an adventure.  And when I say ‘adventure’ I mean a drama packed, hyperventilation filled 5 minute drive followed by self asphyxiation by leash in a waiting room.  And that’s just me!  😉

← From Boy to Man – and About Alice.
Musings from the Laundromat: Storms, Rainbows and Rabbits edition →