← “Fa la la la – Potstickers!”
Musings from the couch – not the laundromat →

All about Butters – and a glimpse at past pets

I was raised to believe that they were family members.  And they always were.

My mum raised Guide Dogs for the Blind in England – we had pups come and go – always happy when they passed and went on to be of service to someone who would be their forever person.

I got used to saying goodbye – but not always for the right reasons.

My Zebra Finches?  Killed each other one night. My goldfish?  Always seemed to meet an ominous end – one time my mum confessed that she was the cause, having put the kettle on next to the bowl. I can laugh about this now.

My rabbit, Rafferty, a very large albino, had his head cut off by a neighbor.  We came home and I thought he was sunbathing. “No!” my mum said, “Don’t go outside.” She knew – I didn’t.  I found out very quickly he wasn’t sunbathing and nightmares ensued.

Teen years in the USA – anything that showed up, stayed.  Was neutered/spayed and adopted out according to my mum’s strict rules.  She interviewed prospects, visited their homes and if they measured up, let the animal go with the caveat “If it doesn’t work out, you call ME first!” 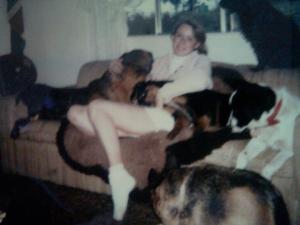 My son’s first official pet was Mortimer. Morty. Me-mo. (You know how names evolve lol).  Long haired dachshund mix.  We rescued him from the Santa Cruz SPCA and what a bonkers dog he was.  Always running away – even from 3 1/2 acres of land to run on. Something about a gate or a wall just had him needing to explore it.

We brought him to the desert with us – and one fateful day he was being walked on leash around the block when another dog attacked him.  Morty ran home, leash dangling, with a broken leg and internal injuries too severe to fix.  He ran home. To me.  On a broken leg!

I called my mum, took him to the vet and came home per their suggestion.  And when I ordered the euthanasia, I wasn’t with him.  I’ll never forgive myself for that.

A cat adopted us next.  Peej.  PJ to be exact. He resembled my mum’s cat Plucky, so we went with Plucky Junior.

After I paid for an abscess to be mended and for him to be neutered, I advised his original owners he was mine.  He was the coolest cat!

She became very ill.  One day there was just a *thud* and when I checked on her, her eyes were bulging.

In the next few months, she lost the ability to walk unaided, I was carrying her outside to relieve herself. She was so young!  I put little baby socks on the toes she would drag, hoping she wouldn’t painfully scrape them.  And in a moment of unselfishness, realized, I was doing her no favors.

Can anyone reading this afford neurological surgery for their pet?  No, me either –  I took her by myself to the vet knowing I wasn’t bringing her back.

She refused to go with them ‘to the back’ to have her leg shaved.  I told them to do it with me.  They hesitated, but did so.

When the vet injected ‘the dose’ – my sweet, sweet Cady not so delicately convulsed.

I knew this was wrong!

I was sat on the floor, her head in my lap and I knew she wasn’t being ‘put to sleep’ – did they skip a step???

“Give her more! She’s still alive!” I told the vet.  She gave me the ‘you don’t know what I know’ look, but then looked panicked and injected more into my sweet pet.

It’s supposed to go like this: Sedate dog, overdose dog with sedation.

That did not happen, and also is something I will never forget nor forgive.

As you can imagine, I was not ready for another dog.  This stray showed up and I threw it chicken.  I then gave ‘it’ cat food (all I had)

It looked like a boy and it looked intimidating.  I decided to go for it.  After feeding ‘it’ – I sat on the ground and threw a frisbee.  It rushed toward me, not the frisbee and I braced myself.

A pup like ‘attack’ of epic proportions ensued.  Such love and play from this stray.

I was determined to find its owner.

After discovering it was a ‘she’ I posted flyers, and put her on local TV.  She knew ‘Sit’ and was potty trained.

After no one came forward, I worked toward finding her a forever family.  I knew I couldn’t afford a dog.  Not just the food – but I’m an advocate for being financially able to care in all aspects for a pet!  Shots, Check Ups, Accidents etc. etc.

Yeah, we ended up keeping her.

Not long after, Peej was next to pass.  Money may not buy happiness, but it sure as hell would have saved Peej.  He became ill and was in a lot of pain – I held him as the euthanasia went right.

Butters sleeps with me.  Actually, she hogs the bed.  I don’t care.  Pets are family. I’m fine with the inches I have of my California King bed.

She trembled … I held her.

She drooled – I wiped her mouth.

I KNOW I can’t afford a vet – so I prayed (yes, the agnostic prayed) that she was just going into heat (another thing, I have a friend who has donated 1/2 of her spaying cost, and she STILL isn’t spayed – the amount of times I kick myself and berate myself for that – but see!  You must be able to AFFORD a pet before you take one on! I only kept Butters because the alternative was the pound. The pound was a death sentence.)

Today, my son was home and I asked my work if they minded me leaving early.

I did not want her taking a turn for the worse alone, and knew Nic was leaving soon.

Here’s Butters enjoying a ‘puddle’ when the desert met the rain. 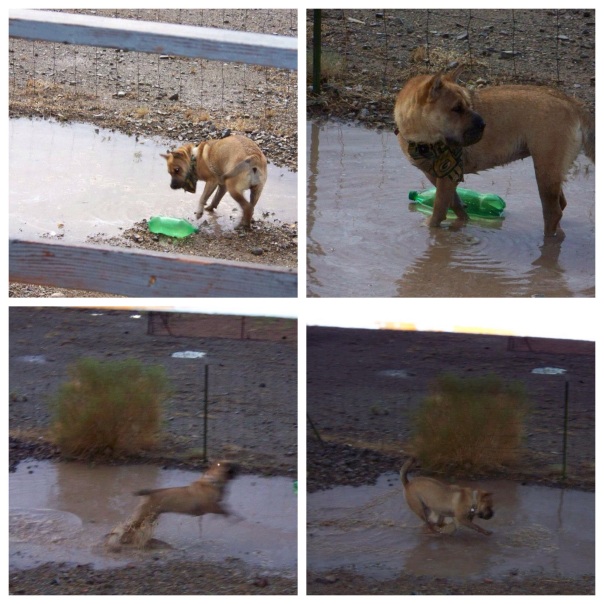 I didn’t care how dirty she got, I had a towel. LOL! 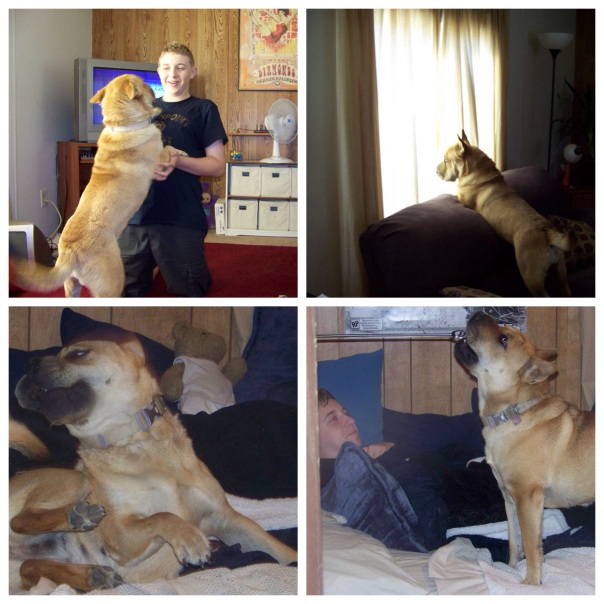 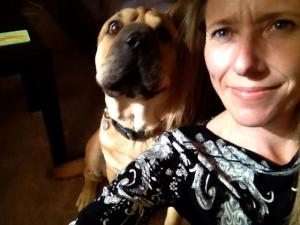 Here’s me copping a selfie with Butters, and Butters not being amused.

The point is – she has become such an important and vital part of our family!

Here she was after I got home early today ….

Before and after … Her body is hurting, she’s limp and sad.

But I’m home and loving her.

Butters, you weren’t invited, but I’m so glad you became a part of our family.

← “Fa la la la – Potstickers!”
Musings from the couch – not the laundromat →