“Have to remember to get gas.” I told myself this morning.  I decided I wouldn’t do it on the way to work, but rather during my lunch hour.

Directly to work I would go.

I’m driving on the highway, which, in our town is 45 miles per hour as it’s pretty much ‘main street’ through several cities.

A desert highway with business and residential areas either side of the road for miles.

With a lot of stop lights.

I’m approaching a stop light when I see something in my lane just after the intersection.

Now, I’m a pretty decent driver.  I haven’t had a ticket or accident in 28 years.  When I was 16 I got a ticket for ‘inappropriate lane use’ (I should have fought that one – it was appropriate.)

And then there was the time I backed out of my parking spot in my private driveway and forgot my parents were in town.

I ended up hitting my moms parked Durango.  No damage to her car, but I’m such a square, that I told on myself to my insurance company anyway.

Bottom line is – I’m cautious, aware, defensive and boring behind the wheel.

So I see this thing in my lane and I’ve gone over every scenario in my head an instant after assessing the traffic around me in each mirror.

‘Probably a plastic bag or a piece of cardboard’

The ‘thing’ was bright red – so I don’t know what store such a plastic bag would have come from.  (Although, we do have two Adult ‘bookstores’ in town – so …)

I had only seconds to decide what to do and I chose to try straddling it and not switching my present course.

This is a millisecond after I am on top of the damn thing and realize what it actually was.

I indicate, pull to the right and crunch my way into a shopping parking lot.

The red thing was this: 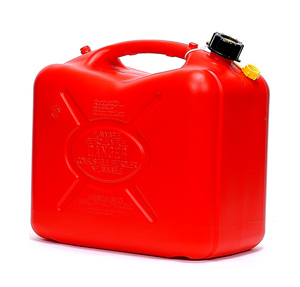 Which is why it was very important that I turned the car to the non-explosive ‘off’ position.

So I’m on the side of a busy road – in a long peasant skirt, pink sweater and knee-high boots – and approach the rear of my PT Cruiser.

On my hands and knees I peer under the car to find the ‘debris’.

Gas container was bigger than I thought, and it would not come out.  Not only would it not come out, but wouldn’t you know it?  It actually had gas in it.

HAD gas in it.

Now most of it was on the ground … and my hands.

I tugged and tugged – it would not give.

I went to the side of the car.  Maneuvered my hand underneath and grabbed hold – all the while thinking – I KNOW someone is seeing a woman on the side of the road, dressed nicely, on her hands and knees and NO ONE is stopping.

The thing finally pops out – I place the container in an upright position and pick gravel out of my knees with my gas soaked hands and return to my car.

The rest of the drive was pretty uneventful, except for all the jokes I was making in my head.

‘Well, I did need gas’ and ‘Been a while since I’ve been on my knees’.  (My inner joker has a dirty mind – I try to ignore her – but I was inhaling gas fumes at the time.)

I’m retelling this to someone I work with and she says: “I saw that on the side of the road!!!”

Posted on March 3, 2014, in Uncategorized and tagged accidents, driving, funny, gas, humor, monday commute, safe driver, side of the road, things in the road. Bookmark the permalink. 3 Comments.