← Musings from the Laundromat: College and Hypoallergenic Tortoises Edition
Of Boys and Branches →

It sounds so important and jet-setty doesn’t it?

“Oh my goodness I still have to pack for my business trip.”

I was given my hotel reservations – my rental car reservation and the company credit card.

Was still feeling pretty grown-up and important at that point.

I then shared what car was reserved for me with my mom – who, after showing some interest and googling it – found an article that mentioned there was really only enough room to put habitrail tubes in the trunk.  Yeah … the hamster kind.  And yes, the car review really, truly said that.

I did not care.  As long as it ran, was newer and safer than mine, and I wasn’t paying for it, I was going to love it.  Even if it came with a box of live hamsters that had to accompany me on my ‘business trip’.

I did insist on GPS though.

It’s not likely I’m going to be on a high-speed chase advising dispatch that the perp is now ‘headed South Easterly on Main Street’ now am I?  Is ‘Easterly’ even a word?  This is how geographically challenged I am – I don’t even know how to speak the language.

I packed light.  dressy clothes for the office and the dinner I was invited to after work, 3 pairs of underwear, a fresh top for the drive home and the jeans I had on me for the drive.

I said goodbye to Nic (who wasn’t that bothered that I would be gone for two nights) and to Butters (who did appear bothered that I was leaving.)  This has helped me decide who is in my will immensely. 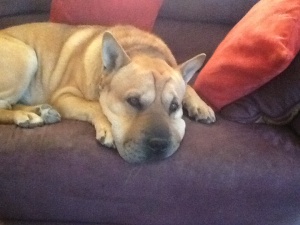 The first couple of hours in the trip went well.  GPS didn’t have much to do as the first leg of the trip is pretty much one road.

How do I make this clear?  How to even find the words to adequately sum up the emotions that hit me like a sledgehammer?

1) 3 pairs of underwear may not have been enough.

2) There is no such thing as ‘letting’ someone in/over.  You want over, you have to aggressively slam yourself into your chosen area as if you’re in some sort of bizarre automobile mosh pit.

3) Going the speed limit in the slow lane is apparently not allowed.  All lanes are subject to the anarchy that is Southern California.  The people have decided that ‘flow of traffic’ is the only speed and ‘flow’ is a nice word for ‘very fast angry rush’

This was to continue for two hours.

Every once in a while, I would find cars to stay behind that seemed to have some common sense – and only going 70.  I stayed behind my chosen escorts only to eventually lose them to their exits.  Noooooooooo!

I seriously felt abandoned!  My blurred, tired, wide eyes followed the direction of the cars as that Jurassic Park line came to my mind: 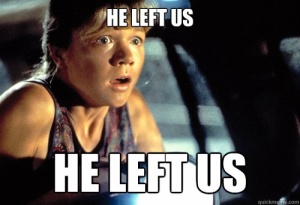 4 anxiety attacks, one very almost accident and about a gallon of sweat later – GPS finally spoke and announced I could exit.

After shakily grabbing my luggage and business trip folder – I walked on shaky legs to the lobby of the hotel.

I saw nothing but the counter I could grab onto.

I pushed my reservation at the front desk employee and managed to get my last name out of my mouth.

I was tired, still traumatized and unable to focus on anything with any degree of accuracy when she gave me the run down of amenities and mentioned that should I want to work out, Golds Gym was free to use, just present my hotel card.

This woke the amused part of me up a tad … I don’t ‘work out’ and after that drive, the hilarity of the offer gave me enough energy to move the car to a spot closer to my room and ascend the stairs.

Of course the first thing I did was enter the free WIFI code and let people know that I had arrived.

Of course the second thing I did was take photos of the room.

I unpacked and after resting for a bit, was brave enough to get back in the car to seek supplies.  I stocked the fridge with dinner and breakfast items.  I was not leaving that room for anything other than my day in the SoCal (I speak that language now) branch.

That night, as I lay in bed, my skin exposed to the linen (I forgot to pack pajamas) I remembered every news show I’d seen on hotel bed bugs.  So before I closed my tired eyes – I checked.

The bed was clear.

I would love to end this with ‘so I slept tight, and no bed bugs were there to bite’. But that’s not how it ended.

I slept loosely – with the neighbor above me who I lovingly named ‘stompy’, the neighbor next to me who talked loudly and blew his nose in the shower who I called ‘connecting door guy’ and the myriad of guests that strode by – their voices and steps echoing metallically in the wee hours of the morning.

And of course, the constant lullabye of the freeway.

Having said all of that I will end with, as insane as the ‘trip’ part of my business trip was, the day in the office made it all worth while.

I am however, insisting that should I need to go again, it will be when teleportation has been invented and perfected.

← Musings from the Laundromat: College and Hypoallergenic Tortoises Edition
Of Boys and Branches →