Of Mountains (and Men who make me climb them)

Was discussing something I’d misplaced with my boyfriend and suggested it might still be in his car the other night.  He replied with one of the funniest sentences of the weekend.  “Yeah, well, you did jump up and run into the house.”

Blatant lie.  I turned to him with a very straight face as I pointed out to him, (like a seasoned defense attorney having trapped the witness with solid evidence), #1, I do NOT jump.   And #2, I do not ‘run’.  Pfffft.  I rest my case your honor.

It’s become a ‘thing’.  A thing I never used to do yet, after Christmas revealed, a thing I’m evidently going to be doing a lot more of.  Hiking boots, backpack, headlamp etc. came in cheery holiday packages.  Ho! Ho! Ho!  Mer-ry Walkin’!

Have to say though, that I truly do enjoy being out there.  Especially like it because it pleases my guy to no end.  I love seeing him smile.  Treasure watching him find a vein or possible ore on the ground and love it when he excitedly shows it to me or teaches me some geological ‘thing’.

And we ‘meander’.  It’s not like we’re marching at some wild pace.  We take in the surroundings and sometimes I’ll pass him up and vice-versa.  We do stay out for hours though, so a lot of ground gets covered. 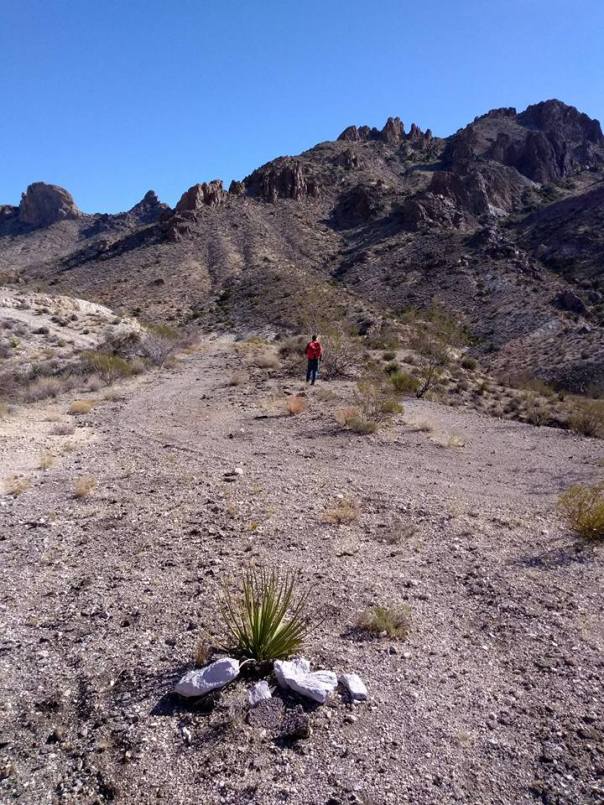 Him: “I really want to check out that rock – I see it from the road and pretty sure something is up there.”

Me: (Hallucinating a fence for the hell of it and putting my complete trust in him that it exists) “O.K.”

He’s navigating this mountain like a champ.  Me?  I’m praying each rock I grab is in fact anchored in some fashion and I’m repeating a mantra in my head that went a little something like this:  “Please don’t let me fall off of this mountain.”

Got to that point where I was half way up and screwed.  Because as much trouble as I was having going UP, I knew down would be worse.  My guy had assured me there was a way to cut around once we’d reached the top and circle back around to the car.  Much like that fence fable, I believed him.  There was no fence.  The fence that had been my deciding factor in even attempting to scale this beast, because once reached, I was going to cling to it as I went higher.

Might be a good time to mention I’m afraid of heights, so, there’s that.

Not entirely sure how, because there were a few times I was literally frozen in fear and couldn’t move without his encouragement, BUT, we made it.  (“We” made it, like there were any doubt he was going to.)

This was the view – and I ASSURE you, the pictures do not do the height or the fear justice.  It’s like trying to take a photo of a full moon on a phone.

Well, you be the judge.  This is the view from the top.

Right after this happened, I heard, “I KNEW it!”

He had found the mine he suspected was up there.

I found the nerve (after an extended visit with the sturdiest rock I could find)  to get up and peek at what he spied.  Um, to the left of him in that picture, guess what’s there?  Go ahead.  Guess.

NOTHING!!!  A sheer freaking drop.

This was the mine entrance … (would have been a better picture, only, I didn’t want to die).

I sat back down while he collected soil samples and picked at various rocks.  While I sat I wondered a) How we were going to get down because that sheer drop sure as hell wasn’t an option.  b) how much a helivac might cost and would I have to be injured or would they just collect me?  c) If I prayed really hard, would my friend put in a good word for me in case there IS an afterlife.

I eventually was able to stand and don my backpack again.  And, wouldn’t you know it?  There was a way to descend in a criss-crossy manner down the same flipping mountain that was 75 times less scary than the ascension.  Where was this route going up?   Seriously??  Cheese and Rice!

I did feel very happy once we were on semi-flat earth again.  Had that adrenaline rush of accomplishment and near-death.

Back to non-life threatening hiking.

We made it to the car and decided to check out an area further down that had mines to explore.

Now, THESE I am not afraid of.   I get to wear my head lamp and barbed wire be damned, plunge into the unknown.  Only thing that’s a little disconcerting is the fact that there’s usually bedding for a 4 legged variety resident.  We’ve yet to meet up with any occupants though.

The best part (other than being outside with nature and my guy) is the delicious exhaustion once back in civilization.

I always feel like I could keep going forever once I’m out there, but we were both nodding off on the couch once home.  Time well spent.

And –  AND!  I didn’t fall off of a mountain.  Halle-flipping-lujah!