← ‘Staycations’ and bonding with the other woman ;)
My life right now →

Musings from the Laundromat: Cars & Comic-Con

Comic-Con should have a villain called ‘Check Engine Light’ man.  It would strike fear into the hearts of all who laid eyes on him.

Thought that was an apropos way to start since another Comic-Con is happening without me.

Driving home from the grocery store last night and “DING!” said my car.

Now, this happened last year too.  Car wouldn’t shift, RPMs climbed sky-high … I ended up driving 10 miles per hour home, shaking, heart pounding – then having my Cruiser towed to have an ignition switch and Solenoid replaced.

Shortly thereafter, “DING!” Turns out they put a bad solenoid in.

And my car was fixed.

Little over a month ago – same issue.  “Ding!”  Light back on, won’t shift, high RPMs – had car towed again.

(I like to think of a tow as a nice little ride for my car.  Wind in its wipers, watering headlights as it enjoys the whoosh of air.  A fun piggy back ride. Takes my mind off the ‘how the hell much is this going to cost me’ thoughts.)

Mechanic could find nothing wrong with it.

They reset my engine light and for the past month or so, I’ve been driving it like it has a bomb taped under the hood.

Now, we know I ‘worry too much’.  I’ve heard it enough. But I seriously have a 6th sense about things.  And so when the “DING!” happened last night – and it repeated its symptoms, I stressed the heck out.

Decided there was no point to that.  It is what it is right?

Get up early, go to Auto Zone for a diagnostic check – pray it coded with the same thing as last time so even if my car decided not to perform badly for the mechanic, I would have proof.

It coded!!! With the exact same issue as the first go around. 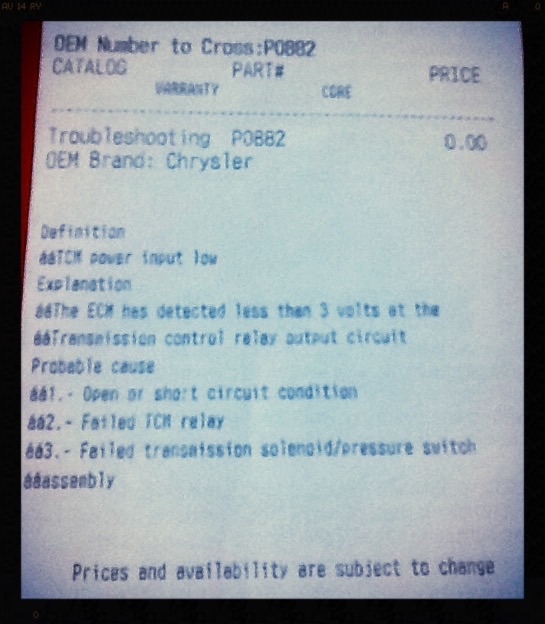 I’m holding that diagnostic ticket like it came out of a Wonka bar and after laundry, I’ll set my car off on another adventure and pray the mechanic honors some sort of warranty.

Cars.  They’re the bane of my existence.  My kryptonite.

← ‘Staycations’ and bonding with the other woman ;)
My life right now →