Musings from the Laundromat: ‘The day I lied about a King’ Edition

I had to do the walk of shame to the customer counter a little while ago.

“My washing machine stopped.” I said.

Which, while true, wasn’t the whole truth.  I needed more time to work up the courage to come clean. (No pun intended.)

The laundromat lady followed me back to my little cluster of machines I was currently using  – and I fessed up.

Now,  it IS thin – but it’s also filled with down and King sized.

“Umm …” I played innocently with a wet corner of the comforter, as we both peered into the water filled, unmoving interior.  “I’m not sure.” 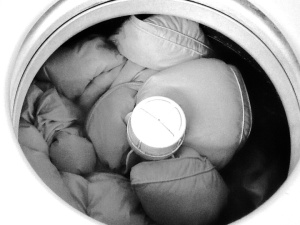 My inner honest-self was scowling at me.  Fiercely.

Luckily, a simple twist of a key in a secret compartment started the machine up again.

I returned to my spot at the Umbrella table and let the shame wash over me.  (Again, no pun intended.)

Karma is a bitch sometimes.

The reason I was washing my down comforter, is because it’s been a little chilly at night.  I had stored it in one of those plastic bags that you vacuum the air out of.

I paid extra for fabric softener – used Oxygenated detergent … pulled that thing out of the washing machine (while feathers attacked me) and could STILL smell ‘that’ smell.

I bought two very over-priced fabric softener sheets and trotted over to the next contraption.  “THE EXTRACTOR”

This was recommended to me by the laundromat lady.  Because, and I quote, “You’ve got to get those things really dry, otherwise the feathers will smell.”

I was thinking it couldn’t possibly smell worse, but I wasn’t going to take my chances.   Melted unhygienic doll baby factory with a hint of wet dead bird isn’t my idea of what something with the word ‘comfort’ in it should smell like.

It didn’t help to see this little picture on the machine – only adding to the macabre images in my head.

This thing was going to twist my arm off.

Okay, it didn’t twist my arm off – but when I did find the courage to reach into “THE EXTRACTOR” I was again attacked by feathers and ‘the smell’.

I then put the offending quilt in a ‘special’ recommended dryer.  I felt so guilty about lying to the laundromat lady, that I dutifully used it and paid extra for the damn thing.

It was specially designed for comforters – and cost more than the regular ones. For three times the price, it offered more space, hotter air and the use of 4 tennis balls “So it doesn’t bunch up” the laundromat lady explained.

Add to the mix two over priced dryer sheets and a prayer.

I sat, displaced from even the rainbow umbrella table – like an exiled criminal, in the front corner of the building.  Serves me right for lying.

When the machine finally stopped, I opened the door and reached in … sniffed a little.  Not bad.  But could be better.

It’s now currently outside hanging off of the porch – having been sprayed with ‘Sleep Serenity’ bedding refresher.

I then noticed the tag –