← Glee, Dickens and Drugs
My (too?) gay proud memo moment →

I have been told I drive like a grandma.

I suppose I do.  If the grandma is a patient, calm, highly skilled driver! 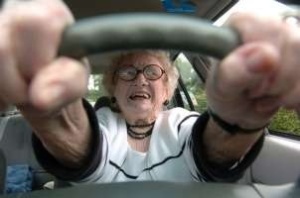 But, in 28 years of driving, I have not had a speeding ticket or been involved in an accident while I’ve been driving.

(Okay, if we’re counting the time I backed into my moms Durango the morning after she arrived from out-of-town, then I’ve had one teeny tiny accident.  But I was so used to just reversing in the driveway and there not BEING a vehicle there!)

No moving violations on public roads.   There.  That’s better.

So I get to vent – because I CAN throw a stone. My house is not made of glass when it comes to this topic.

I’m the driver that would stop at a stop sign the day after a zombie apocalypse.

(Just one of many reasons why I wouldn’t survive a zombie apocalypse.)

So – the reason I need to vent – is because the following events happen to me on a regular basis:

Let’s take these one by one shall we? 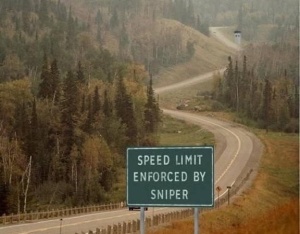 I observe these things.

I observe them because I interpret ‘limit’ to mean, the most – the max – the tippy tippy top.

And because I’m also conscientious, I don’t do the speed limit in the left lane – I stay on the right hand side.  So, if I’m in the appropriate lane for the appropriate speed, do not get behind me and try to mate with my bumper!  Don’t!  Just stop it.

I’ve taken to refusing to watch you in my rear view mirror after noticing you tail gating – I do this so that I don’t absorb the negative energy from your hand gestures or foul faces.  There is a passing lane available to you.  Use it.

PULLING OUT IN FRONT OF ME:

(Yeah … there’s just no way I’m putting that string of words into a search engine … no pic for this one LOL!)

I’ve comforted myself with the following reasoning: Because I’m such a safe driver, my car must be emitting a ‘safe aura’ which other drivers interpret as ‘she’ll stop/let you in/roll on her back in the submissive position’.

What drives me bonkers – is when a car in a complete stopped position – pulls out in front of me so that I have to slow down to avoid hitting said car, when there is NO ONE behind me.

Seriously!  WAIT!  You could have a whole road to yourself.  Just let me pass first!

I think at this point, I need to make the following clear: I don’t drive slowly.  I seriously just am going the limit.  If I was creeping down the road at a snail’s pace, I could understand not wanting to wait for me to pass.

DOING THE ‘WHY AREN’T YOU GOING??’ ANNOYED SHRUG BEHIND ME AT A RED LIGHT:

I believe turning right on a red light is much like a driver’s license … it’s a privilege, not a right.  (Okay, it is a ‘right’ but not a RIGHT … wait … forget it.)

You may turn right on a red light IF it is safe to do so and you’re not interfering with traffic that has the green light.

If I’m not GOING, it’s because there are still cars APPROACHING!  You can’t see them.  You are behind me.

And even if there is a brief moment or two of no cars zooming past – guess what I’m doing?

I’m calculating that even if I DID pull out at that precise moment, I would cause the car that is still approaching in the near distance to have to adjust his speed significantly or change lanes in order not to HIT me!

The part that annoys me the most is that there are people on the road that I see daily.

I really try to be very understanding when someone is an arsehole on the road.

I give everyone the benefit of the doubt.  I imagine the following: “Maybe they’re late to work and stressed out about that”  “Maybe they got into an argument with someone before they left the house and are just not thinking clearly”  “Perhaps they just got bad news and are in a hurry to get somewhere”

But – when the same drivers do it regularly – no excuse.

Get up on time.  Leave early to give yourself enough time to get to your destination, like I do.  And quit being such dicks on the road!

Ooo!  And OFF road too!  Don’t even get me started on the people who speed through my neighborhood, kicking up rocks and dust with their obnoxious speeding tires.  Kids and animals are out and about … slow the hell down.

← Glee, Dickens and Drugs
My (too?) gay proud memo moment →