← The quandary of Facebook
Musings from the Laundromat: A Full Heart and Fridge edition →

Musings from the laundromat: Panic and the Past edition.

“You’re not in danger … try to breathe with me.  I’m proud of you – you’re going to come through this.”

Those were the words I listened to as I struggled to my knees and bent over the couch, clutching at it as air snatching fear hit me wave after wave.  My heart pounding – on the verge of fainting.  Mouthing “please, please, please” to some power greater than me.  “Please – no.”

My vision blurred in and out.  My arm tingled.  Palms sweat.

And, nearly an hour after it had begun, it was okay.

That was my panic attack yesterday.  They come out of the blue.  This one in particular while I was merely laying on the couch watching a television show.

The one who talked me through it?  The one who held my hand and stayed calm when I could not?  My son. 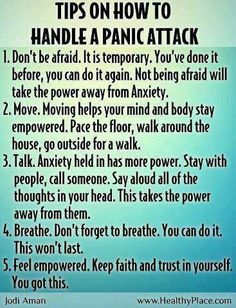 I know all the tips mentioned above by heart – but ironically, since I do also have a very real heart condition, these ‘spells’ as we refer to them in my home are exacerbated by that knowledge.  It’s hard to tell yourself ‘everything is going to be ok’ when at the same time, your brain is saying, ‘but what if this time it’s not?’

I was exhausted and grateful. And slept, after finally being able to assume a horizontal position again. The thing about panic attacks, your whole body gets the equivalent of ‘restless leg syndrome’ and staying put only amplifies the experience. Rocking helps if you can’t get up and walk. And if you’re feeling dizzy, pacing probably isn’t the best idea.

I know why this one occurred however.  I had stayed up far too late spending time with … My past.  We’ll leave it at that.

Got up at my usual time yesterday morning and woke Nic.  We went to run errands.  Oil change (that turned out I didn’t need) a car wash that I wasn’t able to have as they were having electrical issues.  Then lunch with Nic.

That was the good part.

I love spending time with him.

We had so much more on the agenda – but after lunch, neither of us felt up to continuing.

We came home and resolved to finish our errands today.

The house was pretty clean and that’s when I decided to catch up on a few recorded shows.

AND that’s when it hit.

I tried to ride it out, realized this was a big one and managed to reach my iPad and send Nic a message asking him to come and sit with me.

And I want to thank him for going above and beyond.  And caring so much.

As for my past – I’m going to leave it there.

I’m going to stay in the moment and seek healthy, positive and calm things.

← The quandary of Facebook
Musings from the Laundromat: A Full Heart and Fridge edition →