I did not leave the house yesterday.  I did not speak a word to another human being all day.

There were no possible moves I could make that would not leave me at a disadvantage – so I stayed mute.

I declared the day Netflix/Nap day and Butters and I became Saturday hermits and shunned the world  outside.

After six, yes six independent movies – I made my move – in email form, a simple move requiring only a logical, honest response.

And now I wait.

I started with Mr. Nobody starring Jared Leto.  If you’ve been reading this blog for any amount of  time, you know the capacity I have for inner tangents and the propensity to think ‘too much’.   What I got out of Mr. Nobody was this odd thought

I thought about all of my exes – yes, all of them.   How some of them hated me for ending things.  Then I thought of something coming to me before I broke things off  with a glimpse of the future for me to consider.

“He has children waiting to be born – and they’re not yours.  You have to let him go.”

Next I watched, in no particular order, Prozac Nation, Tiny Furniture, Somewhere and L.I.E.  I capped the night off with Muriel’s Wedding because L.I.E. disturbed me somewhat and I needed an ABBA fix.

The Elephants in the Room

No, really, they’re there.

I would stare up occasionally at the ceiling and marvel at the shadows they cast. 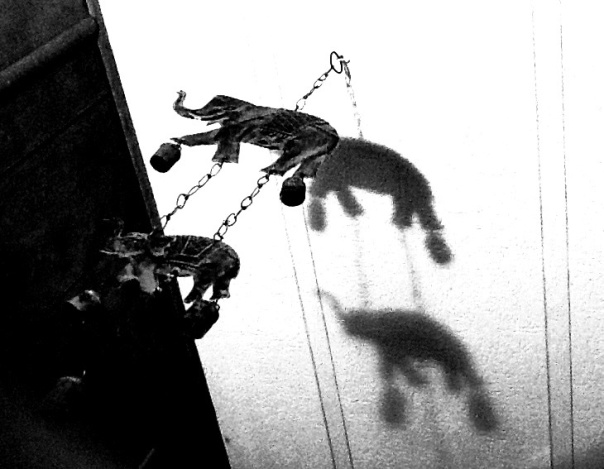 Above my bed they hang and dance in their shadow form.

Elephants in the room.

Tangent-minded me thought of a myriad of things they represent.

But for once, I didn’t go too deep.

The silence was enough – to be silent and plunge deeper might have been too far for me to resurface from without that need to gasp for air, lungs burning and stinging eyes.

We’ve all been at the bottom of a pool for too long at some point – you know how that feels.

By mid afternoon I was hungry.

I haven’t really been shopping for myself – all the food in the freezer is for my son, who is rarely home.  But I was not going to touch it.

I wanted something warm.  I can’t remember the last time I made the effort to cook something more involved than a scrambled egg.

Then I happened upon a cup-of-noodles that I was sure Nic wouldn’t miss.

I set the kettle to boil and assessed my kitchen.

Who needs such an amount?

Soon it will be just me in the house – and as a grand gesture of sensibility  I will remove all but three cups, three plates, three sets of forks, knives, spoons … maybe 4.  4 is a nice even ‘set’  isn’t  it?

I don’t think sensibility is the right word.  But I can’t think of the one I want – so it shall stay.

The cups and silverware shall not.

I’m downsizing – ridding myself of cupboard fillers and unnecessary space wasters.  Of clothes I’ve kept in case I get ‘bigger’ – of dried goods in the pantry I thought I might eat one day.

On a larger scale, I’m relieving myself of internal clutter – persisting thoughts and obsessive compulsive needs.

One box at a time.

And am still waiting for a response to my move.  For some honesty and closure.

Then I’ll remove another cup.