Musings from the Laundromat: Vultures and Sleeping Dogs edition

I stayed up until  2 in the morning last night completing a side job I’d committed myself to.  It helped that The Breakfast Club was on.

Some of my favorite dialogue from that movie:

John Bender: YOU ARE A BITCH.

Claire Standish: Why? ‘Cause I’m telling the truth, that makes me a bitch?

John Bender: NO. ‘Cause you know how shitty that is to do someone, and you don’t got the balls to stand up to your friends and tell them you’re gonna like who you wanna like.

Yeah!  Go John!  But, Claire was just being honest.

I stayed up late and mentioned online that I could sleep in.  A friend pointed out that I wouldn’t.  True.  This is true.  I awoke at 7-ish.

Not so much the dog – she was sleeping in.

I decided to let sleeping dogs lie and gather the laundry.

I live on a dirt road – in the desert. As I turned left onto the paved road, something caught my eye to my right.

I checked my rear view mirror and spotted the eye catchers.

A U-turn was in order.

I could not let a moment like that pass without being photographed.

I pulled up next to them as ninja-like as I could in a PT Cruiser and turned off the car, and waited.

And wished I had my ‘real’ camera.

And wished I had my tripod.

I began to feel the vulture’s frustration as car after car came along to keep them away from the kill.

The kill by the way, was a rabbit. Well, part of a rabbit. It was mostly the head and some torso … a leg was about a foot away from it. (No pun intended)

Every time a car came along, I looked away … I didn’t want to see it run over. My stomach can only stomach so much.

At last a brave vulture decided, ‘screw this – I’m getting the rabbit’ and swooped majestically down and took hold of the carcass in its beak.

And I wished again that I had my camera.

Vultures are an awesome sight to behold. They’re HUGE and gorgeous.

I did not do them justice with my ipad – but you use what you have.

Here’s what I have:

You can see the foot on the yellow line – lovely isn’t it?

Another attempt that ended up thwarted by oncoming traffic. 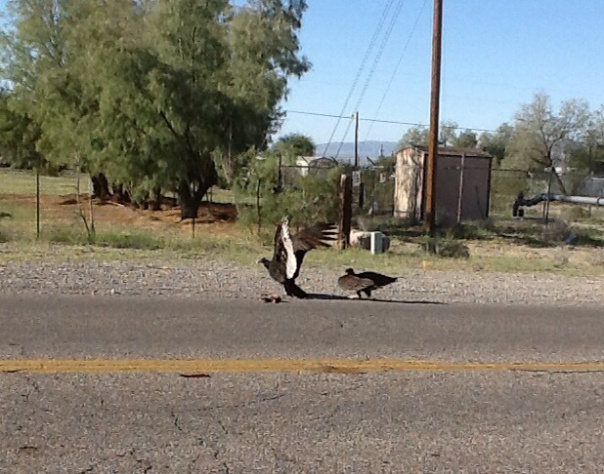 You don’t get something for nothing people.

Got to help plant, harvest and bake if you want that bread. Or, get off your telephone pole if you want rabbit.