Porch sounds – what about the children??

The neighbors are fighting again.  They’ve been fighting with some consistency since my first blog post about them:

If a visit from the Sheriff and a trip to jail isn’t a deterent, I suppose I shouldn’t have been surprised to hear angry screaming yesterday evening and the unmistakable sound of a slap.

The problem I have is this, I don’t know when to get involved anymore!

I only called last time when it was very apparent that the children had been in the house during the violence.

I’m not going to lie – there’s a big part of me now that cares a hell of a lot less about that woman. Especially after saying to her little girls “Because daddy tried to kill mommy” then putting them back in that house with daddy.

I’ve received letters from the District Attorney.  Apparently, I was the victim of ‘Disorderly Conduct by Domestic Violence’.

There were originally 4 counts to my neighbors charges.  They diminished over the course of a couple more letters.  I don’t know too much about the court system but I assume the following:

1)      I am the victim because perhaps the woman who received the blows decided against pressing charges?

One letter mentioned a fine and court ordered anger management/counseling.  The last letter I received only mentioned the fine.

I never heard back.

After last nights charming background noise to my relaxing porch reading – I’ve been thinking more and more about those little girls.

I know what just hearing it from afar does to me.  My stomach clenches, the blood rushes from my gut to the soles of my feet in a cold whoosh.  I’m transformed from a 43 year old woman to a scared child.

I could go inside.  I could drown out the sounds – self soothe.  But those little girls are still in there.  They can’t get away from it.

I stomp over to the house mid-fight.  Knock on the door.  They open the door.

“Hi.  Obviously you two have plans tonight –  so while you’re busy beating your wife and she’s busy taking it, how about I take the children over to my house until you’ve gotten your rocks off?  Then you don’t have to worry about them getting in your fucking way?”

What I would give to do that.  To say that.  Then to march those children out of there and to safety.

Here’s just part of what’s going through my head while I’m deliberating what I can possibly do:

Okay, say I call the sherriff again – what if the children get taken away?  Good you say?  The reality of ‘the system’ is not that of rainbows and candy and warm blankets and laughter.  What is the lesser of two evils?  Can they just take the ‘dad’ away?  But what if he’s the primary provider in the house?  Perhaps the ‘mom’ has issues – if she had help, perhaps she would find the strength to do the right thing for her children and herself? I don’t think the children are being hit, but growing up in that environment is still abuse.

And I’ll say again, because it seriously bears repeating – those little girls are learning how to become women by the examples in their life.  They’re learning that apparently, men hit women,  women go back, a childs safety is not a priority.   Their formative years are being spent soaking up the dysfunction that is their parents.  So when they get older and have issues – I hope they don’t end up in court being held responsible.  After all DA, you decided $300 was punishment enough and let their teachers go back to teaching.  Bravo!

I’ve spoken to a friend of mine who happens to be a childrens advocate about what direction she thinks I should take – what avenues I have available to me.  I’m not going to sit on my porch and pretend that I don’t hear the fighting.  I’m not going to sit and ignore the fact that those children are in that environment.  I’ll find out when to get involved, and how.  And I’ll do the right thing. 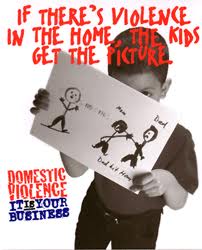 Posted on January 21, 2013, in Motherhood and tagged abuse, advocate for children, children and violence, domestic violence, parenting, plea deals, when to get involved. Bookmark the permalink. 6 Comments.