I will never forget my first night in the home I now occupy.  I lay on my bed, staring up at the water stains on the ceiling with tears running down my face into my ears. 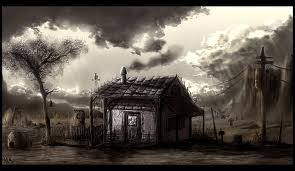 It had been quite a road to that night.

Long story short, I went from owning a two-story home in Nevada and making amazing money at a job I loved – to renting a single wide mobile home that I could afford with my unemployment stipend.

When I was laid off due to the mortgage/banking debacle, I was married to a man who adored me – I had two step-daughters, a dog, a cat, and of course, my Nic.

I was the main bread-winner.  The home was mine before the marriage and so, when the income wasn’t just cut in half, but quartered, there wasn’t enough to sustain the household.

I lost the house.

We moved across the river to Arizona into what we could afford to rent as a couple.

And then I lost myself.

My drinking had increased after I found myself made redundant.  It was a trigger for the inevitable.  I already used alcohol as an escape – it was already escalating, and before losing the house, I found myself confronted by my husband and heard myself telling him I would quit.

I did for a little while.  Then it became my secret.  Who did he think he was?  I drank when we met?  It seemed to be okay when I was supporting the family!

I told myself that, and it seemed to make sense.

I was lying to myself.

Because really the black outs, the arguments, the misery that was my drinking problem, had never been okay.

In our rented home I hid my drinking.  I couldn’t buy obvious amounts of what I liked, and I’d heard that vodka didn’t have a scent – so I would buy purse sized bottles (plastic so you couldn’t hear the ‘tink’ of it against my keys as I snuck it in the house) and hide it in various spots in the house.

I would then dispose of the bottles in public garbage cans.  Outside of grocery stores, fast food restaurants.  Where ever I could look nonchalant tossing a small brown bag.

This went on for over a year, give or take.

I couldn’t stand it anymore!

I quit drinking, got help and came clean with my husband.

I also told him in no uncertain terms that I didn’t want to be married to him anymore.

While this is my blog – and these are my truths, it’s also public.  I won’t go into much more detail about why I didn’t want to be married to him, that’s not fair.

(There’s so much more I want to share with you all, about many things!  One day perhaps – but find myself having to edit myself a lot more here than I had anticipated).

In quick succession – my husband left, I never saw my step-daughters again.

(On my 21st day of sobriety I had to have my sweet dog put to sleep).

I looked for work.  I was ‘over qualified’.  They ‘couldn’t pay me what I last received’.  Or, there just plain wasn’t work in our area.

My son and I found ourselves on food stamps and public health assistance.

Friends and family came to our aid from time to time.

I fought and fought to find a way to stay in the home we were renting at the time – and finally came to the conclusion to LET GO!  This was after selling my nice furniture, my appliances.  Anything I had of material value was sold piece meal to make it one more month.

We found something I could afford.  No washer, no dryer, no dishwasher.  But it was shelter!  It was do-able.

Came OH so close to losing this place too.  I sold my wedding ring, my engagement ring.  His wedding band.  I even sold our DVD’s to a local pawn store for gas money.

Then I found a job.

(That year a dog adopted us and I had to have my sweet cat put to sleep).

I haven’t had a drink in over a thousand days now.  And in less than two months, it will be two years since I started that job.

But back to that first night.

I looked up at those ceiling stains and felt like I was in some sick motel.  I felt like I had let my son down.  I felt inadequate, scared, alone, angry.

I realize now, it wasn’t so much the actual state of the home, but what seemed to me at the time to be a representation of my life.  I was that ceiling.

I was still sheltering my son, but I was stained.  I was in need of repair.

I’ll glance up from my bed from time to time now and notice the stains.  But with my imagination back to its healthy overdrive,  I now see pictures in them.  They’re oddly beautiful, their shapes have become familiar.

It has been well over two years since I that night I cried into my ears – and I have repaired myself.