← A message from Butters
Plans, Posters and imaginary Parenthood →

Saw the strangest sign today on the way to work.

I was third in line behind a red light and to my right, sitting in the dirt was a homeless man (I’m assuming that, I do not know it to be true.)

He held a sign that captured my gaze and my imagination …

I wanted to take a photo, but the light had been red a while and I didn’t want to risk holding anyone up. 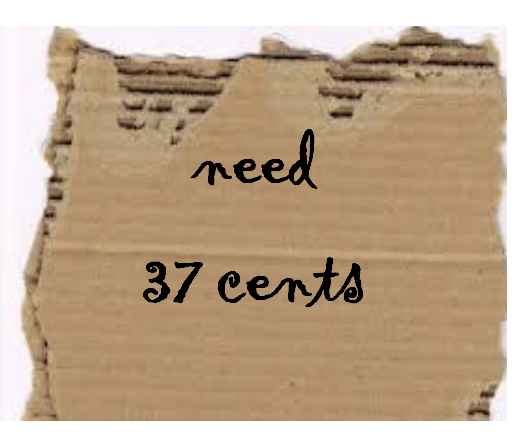 I decided on clever since he’d penned it on cardboard.

I also thought ‘dang! I don’t have 37 cents to offer’ ( I really didn’t, and besides, the light was now green.)

Then I wondered the whole way to work, (even though I decided he was clever) what could he buy with that?  Was he shy that amount for a cup of coffee?

Last thought I gave to the sign and the man was that I hoped he intrigued enough people to pass him some money at their red light.

Hope he’s warm tonight – and would love to have photographed him and asked him about his inspiration for the sign.

← A message from Butters
Plans, Posters and imaginary Parenthood →