There are more men here today than usual.  I look at them, and wonder – ‘are you a father?’.

One man in particular was checking his phone as I stood next to him at the washing machines, my overactive imagination had him being disappointed that he had not received a text from his children.

Probably he was just checking the time.  But, not in my mind.

We have a couple of patrons that I would love to talk to – first, The Man Under the Rainbow Umbrella. 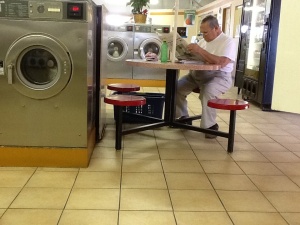 In person, he looks the sort to still use a cloth handkerchief.  I imagine him refolding the newspaper he’s reading before he leaves.  Taking it home and placing it in the same spot his Sunday newspaper has been set down for years.

Then he’ll carry his freshly cleaned items to his bedroom, sparsely decorated, and proceed to put them away.

He’s tidy.  Efficient.  Probably has his Sunday dinner decided upon when he shops for his weeks groceries.

Of course, now I’m noticing the small pink and white slippers on the table next to him and wondering, does he have an ill wife at home?

If so, I love him more.  He’s doing the laundry and including her slippers.  Bless his heart.

Our next patron is the mysterious Man of Mystery and Adventure. 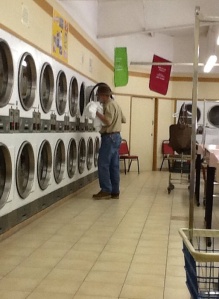 He’s sporting an Indian Jones hat.  And, no, that is NOT a purse hanging from his laundry cart.  It’s his dusty satchel!  Probably has a map in it.  Yes it does.  He feels safe carrying his documents with him into a small town laundromat.  Of course, the jig is up, as I have spotted him.  He doesn’t know how MUCH I know, but he knows I know.

There really are so very many men here today.  Only 2 women … strange.  Shouldn’t it have been that ratio on Mothers Day??

If you’re the father of daughters, treat women the way you would want your little girl to be treated – we notice that more.   Be the man who takes the pink and white slippers to the laundromat.

Wishing you a day of love and appreciation.