I am a movie fanatic.

When I enjoy a movie,  I’m not complete until I’ve had the entire experience!

I need to know about the concept, watch the bloopers, see ‘behind-the-scenes’ and ‘the making of …’.

I’ll Google memorable quotes, visit IMDB and I’ve even ordered press kits and scripts from a couple of my favorites.

But, for me, the soundtrack is the gift that keeps on giving.

Music has always brought out a visceral response from me.  I get literal goosebumps when a note is hit just right.  Everything from Mozart to Metallica rings my musical bell.

As for soundtracks, I’ll hear a certain song on the radio and I’m immediately transported back to the movie it played in.

Here are a few examples:

“Running on Empty” by Jackson Browne – I’m running with Forrest, hearing voice overs in my head.

Remember the Senators daughter, Ruth Martin singing along to it in the truck?  Yeah, that was before she was abducted and instructed: “It rubs the lotion on it’s skin or else it gets the hose again” Classic!

Yup, Silence of the Lambs (One of the scripts I have is to that movie.  The other script is for Hannibal and the press kit ^_^ I think I was a little in love with Lecter.)

“People are Strange” by the doors 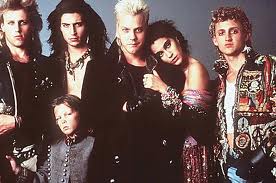 The Lost Boys of course.  (A little sidenote, I briefly dated one of the vampires, ‘Surf Nazi #5’).

“The Way We Were” by Barbra Streisand

Well, that one speaks for itself doesn’t it?  I hear that song and I’m spending my ration stamps on a steak for Hubbell.

“Don’t you forget about me” by Simple Minds.

Pretty in Pink.  Oh Duckie!  I would have picked you!

There are so very many more – but I’ll finish up for now with a fitting tribute.

He passed away today and it’s odd that I already had decided on my blog topic before I heard the news.

Thank you for the music Andy, and rest in peace.

Posted on September 26, 2012, in Uncategorized and tagged Andy Williams, Breakfast at Tiffanys, forrest gump, lost boys, movies, silence of the lambs, soundtracks, the way we were. Bookmark the permalink. Leave a comment.