It already sucks getting older and not sleeping through the night … if I’m not having to get up to pee – I’m having to let my manatee outside or just randomly waking up for no apparent reason at all.

Friday morning began beautifully.  There was weekend excitement, a clear sky – and the scent of rain in the air!

I posted this.  (Of course, because if I’m not photographing the mundane, I’m typing about it) 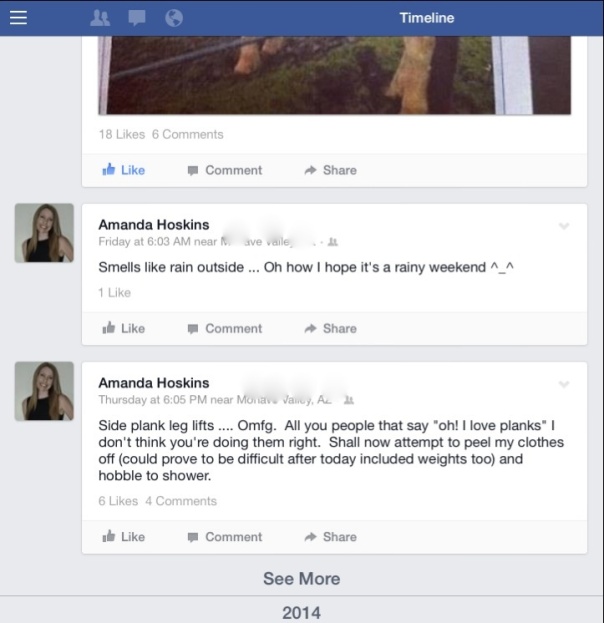 Well, it hasn’t rained yet – but I did get my share of water that night.

I was tired – turned off the TV about 9:30 pm and awoke an hour later.

Let the dog out, shuffled to the bathroom – went to flush – no flush.  Took the top off of the tank and wiggled the little part you wiggle to fill the tank with water and then shuffled off to let the dog back in.

There was a strange sound … a very loud sound in the darkness.

I wondered if someone had their automatic sprinkler system set for 10:30 – odd.

Went back in the house and heard more loud noises – coming from my bedroom and bathroom.

Coming up from behind my toilet was water.  A lot of water.  I grabbed the closest towel, which happened to be a Pokemon towel from my sons past.  Pikachu (an electric type Pokemon) dangerously thrown to the watery ground.

Now I’m fully awake.  And after throwing flip-flops on I grabbed in the dark for a flashlight.  (Note to self: Buy a flashlight)

I did come up with a small miners light – which I refused to wear on my head, so I carried it outside.

The corner of my house was leaking.  When I say leaking, I mean, a mad rush of pressurized water was pouring out from under it – and down the siding from underneath my bathroom/bedroom area.

Now I’m no helpless maiden – I knew I had to turn the water off.  There was a pipe with a lever right next to the flood … I put it in the ‘off’ position.  Nothing.  I trekked over to another set of pipes and flipped that to the ‘off’ position.  Water subsided then stopped.

I learned the next day from the plumber that my first attempt turned the gas off.  Good to know, good to know …

They look-alike to me! 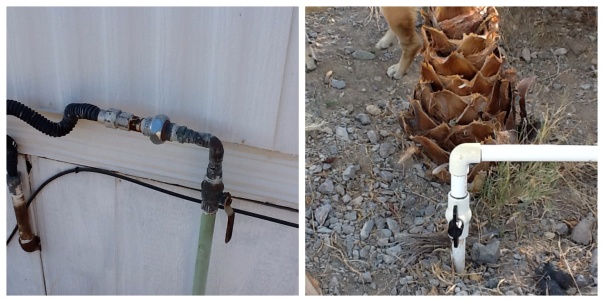 I went inside and called my landlady’s cell phone – letting her know what happened.  She said she would call a plumber.

Now – at 10:30 at night, I’m normally not in the market for water.  But isn’t it odd when you suddenly don’t have something you take for granted, you suddenly MUST have it.

I wanted to brush my teeth before going back to sleep. (I’m pretty obsessive about brushing my teeth – I go a little overboard)

I was relieved to find a small bottle in the fridge.

This was to be my ration – and I sparingly used some to brush my teeth and wash my hands.

Morning came and I had a little bottled water bird bath and then posted this:

That’s how I felt.

Situation dire.  I had planned to clean like crazy – and here I was – merely surviving on my precious depleting bottle of water.

He took a look in my bathroom – then outside – then advised me it was an easy fix.  The tube thingy connecting the toilet to the pipe under the house had broken off.

Fun part was getting to be the one turning the water back on when he was laying on his back with his legs sticking out under the house.

“Okay!  You can turn it off now!”  I didn’t dally – I’m not sadistic.  But it was satisfying that someone could see that I was not exaggerating about the amount of water that blasted out the night before.

It seriously had sounded like someone was power washing the outside of the house – THAT loud.

Here’s the damage it did, after the brief time it was on when he was underneath:

The floor of the bathroom was a little paddling pool – under the house was dripping, and the strength of the spray had dislodged insulation and whatever that mesh stuff is.

Water back on, plumber thanked – I went about my normal routine.

And now – should I have a gas leak, I’ll know just where to turn that off.  Although, once it’s off and I’m without gas, I’ll probably suddenly want to bake something.